Trips by train and bus

Why not try a day out without the car? Take advantage of not having to keep your eye on the road and being a little above other traffic on the comfortable seats of the bus and train. The Cambrian Line brings you into Aberystwyth and provides a link to  six of The Great Little Train Lines of Wales.  The fast Traws Cambria bus services connect Ceredigion's main towns with others across Wales, whilst local routes transport you along pretty lanes to country villages and Ceredigion's best beaches. 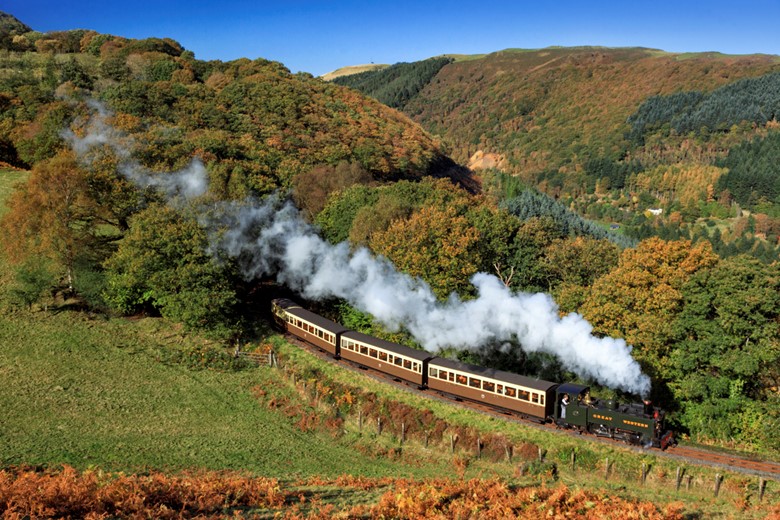 The Vale of Rheidol Railway between Aberystwyth and Devil's Bridge follows a spectacular route along the Rheidol valley, initially through lowland meadows, then climbing across wooded slopes, with views of the lakes and waterfalls.  The stops are  convenient for visiting the Rheidol falls, the Cwm Rheidol hydro-electric power station and visitor centre, reservoir and fish ladder and nearby Magic of Life butterfly house.  Break up your journey  and follow woodland walks between station, and enjoy a riverside picnic on the way.  From the terminus at Devil's Bridge you can visit the multi layered bridges and Mynach Falls​.

There are special evening excursion trains and events where you can enjoy  music and dressing up, as well as  Halloween and and  Christmas Santa trains. You can even try your hand at being a driver!

Connect with other steam railways with the Cambrian Line

Hourly train services run  to Aberystwyth from London and the Midlands via Shrewsbury and Machynlleth. Recognised as one of the most scenic rail lines in Britain the Cambrian Line  follows the Wales Coastal Way  from Machynlleth to Aberystwyth and north to Pwllheli. Along this route there are six narrow gauge steam railways which can be reached from the mainline stations.

The Talyllyn Railway that inspired the Thomas the Tank Engine stories can also be enjoyed as a car free day trip from Aberystwyth, travelling by Cambrian Line train via Dyfi Junction or Machynlleth to Towyn to catch the narrow gauge steam train to Abergynolwyn, in the shadow of Cadair Idris mountain. Between the northern slopes of Cadair Idris and where the main line crosses the Mawddach estuary is the little Fairbourne railway.

For a longer day out, travel on the Cambrian line via Harlech, to Porthmadog, where you can join the Ffestiniog and Welsh Highland Railways for a trip into the heart of the mountains of Snowdonia.

Heading east and inland with the Cambrian Line takes you to Welshpool where you can take a trip on the Welshpool and Llanfair Caereinion light railway.

The Cardi Bach bus service is ideal for walking the Ceredigion Coast Path or for spending the day at the beach without having to take the car. The Cardi Bach coastal village bus service runs throughout the year (see timetable for details) calling at the popular village resorts of Aberporth, Tresaith and Llangrannog and the quiet cove - ideal for wildlife spotting, of Cwmtydu. The route is also convenient for visiting the National Trust beaches of Mwnt and Penbryn, stopping at the top of the lane leading down to the beaches.​​​ 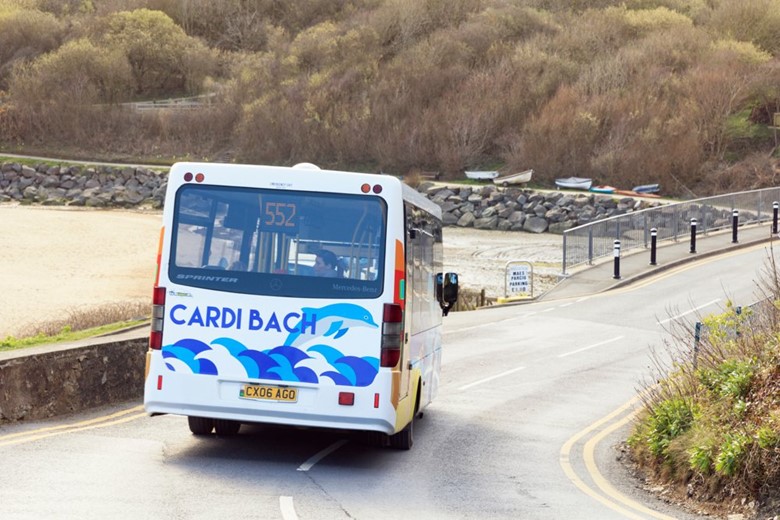 Get to know the communities of Ceredigion  - explore by bus

It is easy to have a car free day out in Ceredigion - here you'll find some ideas for trips and excursions from our main towns by bus. Ceredigion has great scenic routes and bus services which will help you make the most of visiting country towns and villages and exploring the coast and the coast path.

Explore the lower Teifi Valley from Cardigan with the 460 bus. The route is via the waterfalls at Cenarth, the market town of Newcastle Emlyn and Drefach Felindre, home of the National Wool Museum. This is the route, between Cardigan and Carmarthen that gets you to Henllan for the Teifi Valley Railway. 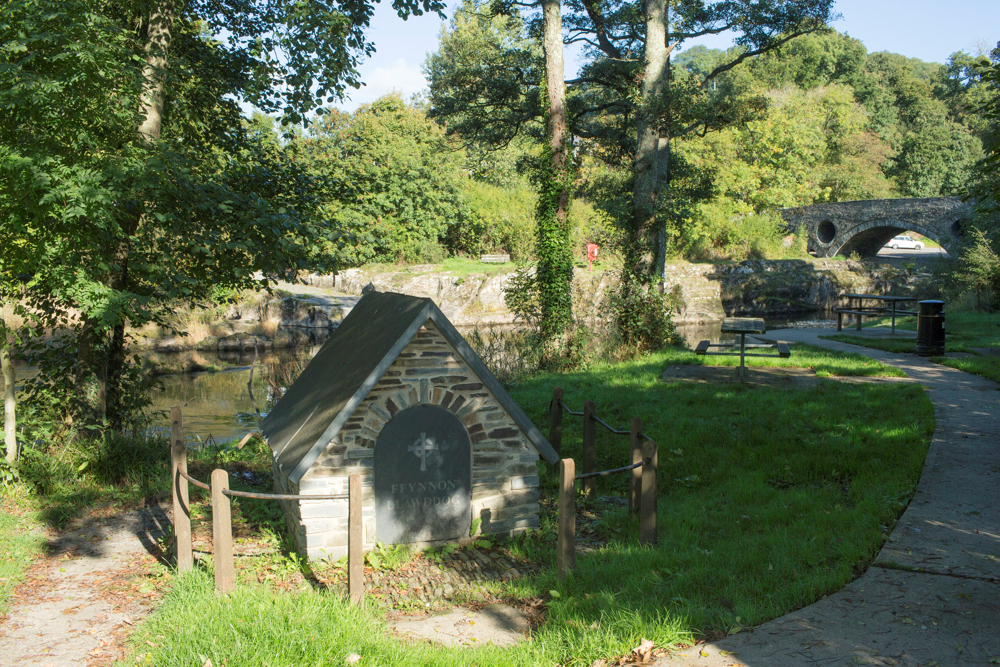 Explore the Dyfi Biosphere by train and bus

Use the Cambrian Coast railway to explore the UNESCO Biosphere area between Aberystwyth,  Machynlleth  and beyond. Stop at Borth to explore Cors Fochno, the submerged forest of 'Cantre'r Gwaelod', the river Leri and Ynyslas; cross the Dyfi and take a trip to Aberdyfi on the northern side of the estuary - find the bell that chimes at high tide. 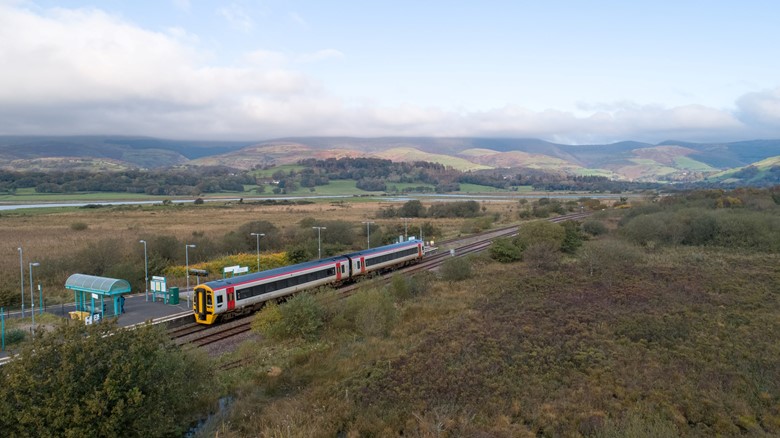 Take the 585 route between Aberystwyth and Lampeter via Llangeitho, Tregaron,Llanddewi Brefi and Cellan to see the places where sheep and cattle drovers started their journeys across the mountains to the livestock markets of England. Get a taste of walking these ancient ways by following walking routes from each of the settlements.

An alternative route between Aberystwyth and Lampeter - with the 588 service- takes you over the Mynydd Bach and the hamlets of Trefenter and Bethania, then Llangeitho, Llanio and along the Dulas river valley via Llangybi to Lampeter.

Another route between Lampeter and Aberystwyth is with the T1 TrawsCymru service taking you from the Teifi valley town via Felinfach and along the Aeron valley to Aberaeron, and north along the coast via Llanon and Llanrhystud to Aberystwyth.

The journey on the Vale of Rheidol Railway between Aberystwyth on Ceredigion's Cardigan bay coast to the heart of the Cambrian Mountains at Devil''s Bridge is a highlight of a visit to Ceredigion.

Use the Cambrian Coast railway line from Aberystwyth 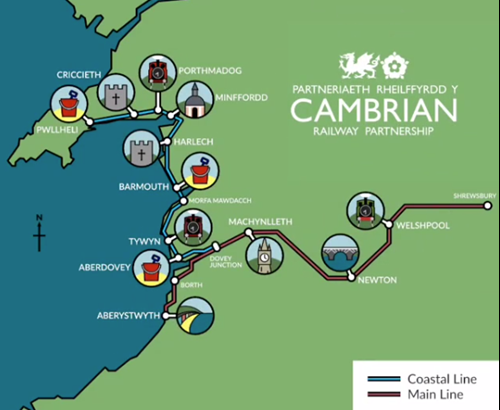 to reach other steam railways along the coast:

Also linked to the Cambrian Line to the east are:

Other heritage railway lines to discover  are:

Corris Railway  - travel by bus to the north to Corris,  via Machynlleth 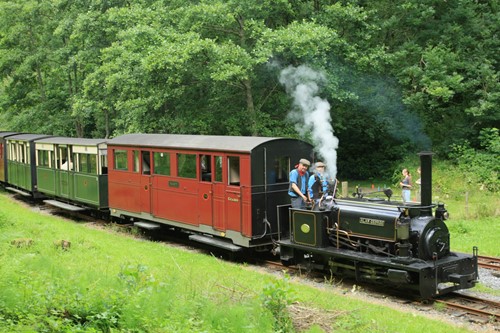 and not far away is the

For all local bus routes and timetables  including Cardi Bach and pre-bookable services with Bwcabus and Community minibuses. 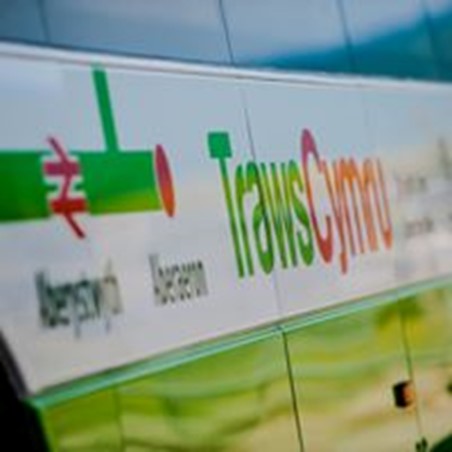 TrawsCymru, the long distance bus network of 10 routes across Wales, is the ideal way to explore. At weekends  there's an added bonus - the services are free every Saturday and Sunday,  and there's no need to book in advance.

Services to, from and within Ceredigion are:

Getting to and from Ceredigion by public transport

By train: Direct  train services run hourly services to Aberystwyth from London and the Midlands via  Birmingham International and Shrewsbury. The route - the Cambrian Coast line - is one of Britain's most scenic.

Alternatively, travel via Cardiff and Carmarthen by Great Western rail, and then onward to Aberystwyth by TrawsCymru coach service T1, or the 460 route bus service to destinations in southern Ceredigion, including Cardigan.

From the north, or Ireland, travel by rail to Bangor and take the T2 bus service south. From Fishguard harbour, the T5 bus travels north along the coast of Ceredigion  calling at Cardigan, Aberaeron and Aberystwyth.