Aberaeron, is picture postcard pretty with colourful and graceful buildings, friendly leisure harbour and a great series of summer events. Once a busy fishing port which also saw families emigrate to the New World, Aberaeron today is one of Ceredigion's best loved towns. ​

Aberaeron is a rare example of a town that was planned from the outset. The graceful lines of the houses and commercial buildings grouped around the harbour and a principal square are a distinctive feature. The town and harbour were developed in the early 1800s by a local entrepreneur, the Reverend Alban Jones-Gwynne, who obtained an Act of Parliament to develop one of the first ‘planned’ towns in Wales. 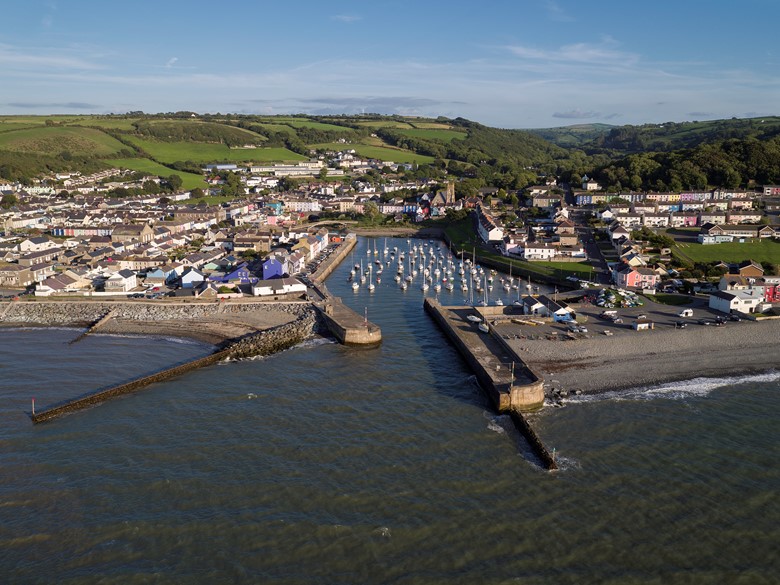 The distinctive colours and render pattern on the Regency style houses - not unlike the edge of a postage stamp - were featured on the one penny postage stamp in a series celebrating British rural architecture.

No wonder it was voted the 'Best Place in Wales' by the Royal Town Planning Institute.

On the water at Aberaeron

Aberaeron seafront and beach is divided by Aberaeron harbour mouth, where the delightful river Aeron flows into Cardigan Bay

The main harbour at Aberaeron changes character with the tides and the seasons. It drains almost completely at low tide, whilst the sight of Atlantic waves rolling along the harbour wall is as much of a winter spectacle as the glorious summer sunsets. The sheltered inner harbour is known as 'Pwll Cam' ("crooked pool").

The fortified enclosure that was Castell Cadwgan ("Cadwgan's castle") may still be hidden beneath the sand and boulders to the north of the harbour mouth, but the sea claimed its probable wooden structure a long time ago. The modern sea defence structure along this part of Aberaeron's waterfront now provides a pleasant accessible route along the waterfront between the harbour and town carparks and playing fields.

Aberaeron mariners travelled the world. Spot the names of faraway places on houses, such as Bari, Gambia and Lima – places in southern Europe, West Africa and South America respectively. Follow the town trail and find the plaque on the south side of the harbour that names all the ships that were registered at Aberaeron.

The river Aeron enters the harbour over a series of wiers. Follow the Aeron river upstream along a pleasant, accessible riverside path to enjoy the bluebells of Panteg woods in spring, and look out wildlife including fish in the clear waters and the herons patiently waiting for them on the riverbank.  Return to the town centre via the park, tennis club and Memorial Hall to Alban Square, where many of the town's annual events area held. 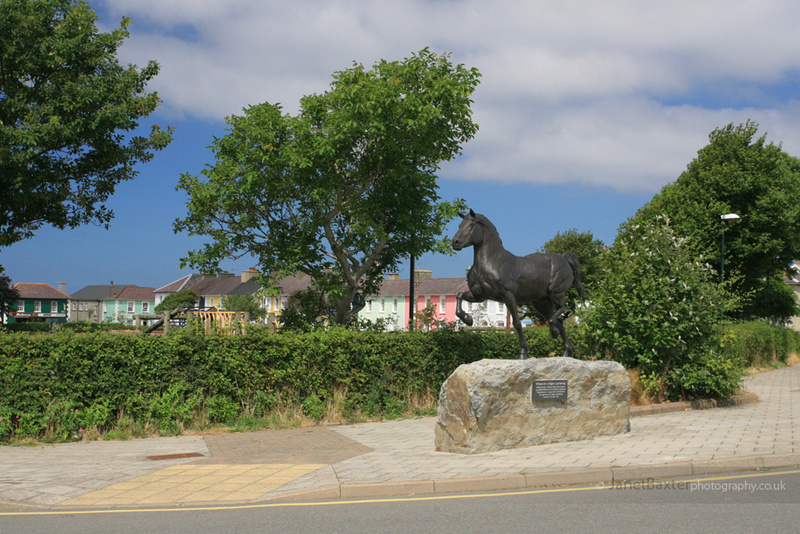 You can continue along the river valley on foot or by bike to Llanerchaeron, a gentleman's estate, with a long and distinguished history, now owned by the National Trust. The villa, designed in the 1790s, is the most complete example of the early work of John Nash, the architect of London's Regent Street and Regent's Park.​

For over three and a half centuries, Llanerchaeron was the family home to ten generations of Lewis/Lewes family. Remarkably unaltered for over 200 years, this self-sufficient estate includes a farm, walled gardens and lake. The villa has its own service courtyard with dairy, laundry, brewery and salting house, giving a full 'upstairs, downstairs' experience. 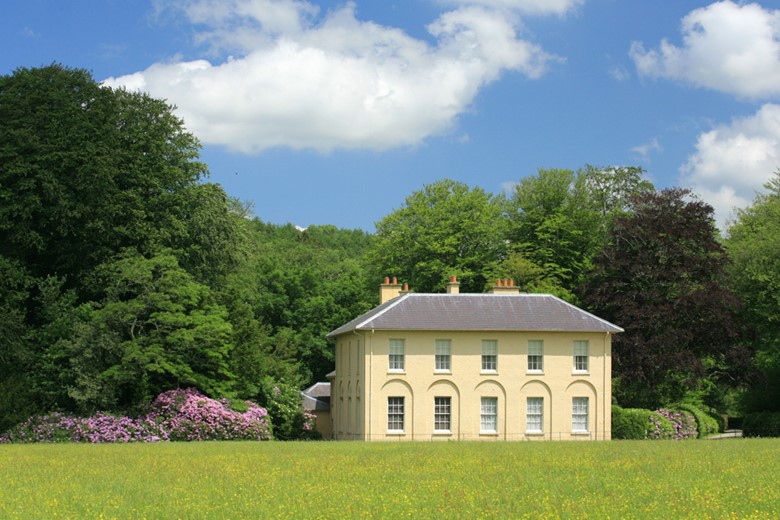 Aberaeron is centrally placed along the Ceredigion coast, and a favourite stopping point for those travelling north or south. It is also a perfect point for heading inland along the broad wooded valley of the river Aeron and onwards to Lampeter, Tregaron and the Cambrian Mountains.

Between May 1 and September 30, dogs are prohibited from the area of Aberaeron South beach between the Harbour walls and the groyne to the south of Beach Parade.

To the south of this groyne, towards the cliffs on South Beach, and all of North Beach is accessible to dogs throughout the year.

Dogs should be kept on leads along Beach Parade.

August is a great month for events in the town with the annual carnival weekend, a rugby 7s tournament and the annual Welsh Pony and Cob Festival when the best of the breed is celebrated with parades, displays, fun and games. Even the humble mackerel is celebrated with a quirky annual parade and ritual beach 'funeral'. 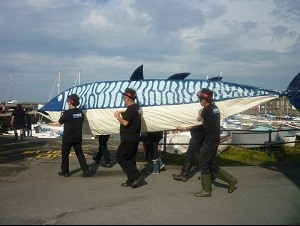 Sailing​ plays a major part in the life of the town and the colourful harbour is awash with boats in summer. It's not many towns that can boast a tug-of-war competition across the harbour mouth, with the losers inevitably being pulled into the water.  A series of regattas are organised by the Aberaeron Yacht Club each summer, as is the town's beer festival.

With the Cardigan Bay Seafood Festival held in July on the quayside as well as several popular bistros, cafes and restaurants, Aberaeron is without doubt a foodie's delight. the festival is an unmissable opportunity to taste local seafood and other local produce prepared by local and celebrity chefs along the quayside.​

For locals and regular visitors, a stroll along the quayside, at any time of the year, is not complete without a portion of fish and chips and some delicious honey ice cream.