Cardigan - historic harbour and market town on the Teifi

Birthplace of the Eisteddfod

Cardigan is the historic gateway into Ceredigion from the south west. Cardigan's Welsh name is Aberteifi:  [town at] the mouth of the Teifi, ​giving its name to Cardigan Bay as it developed as a significant 18th century Atlantic seaport. 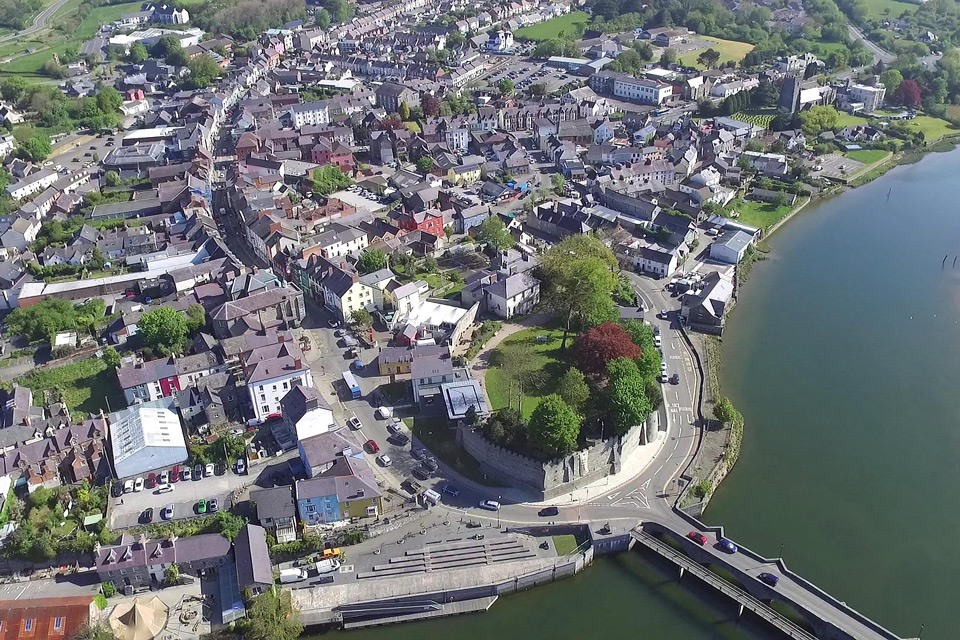 Cardigan lies at the first, strategic bridging point across the river Teifi, hidden from the sea by a bend in the river.  Other advantages which encouraged the growth of the town were access to the woods and the rich agricultural land of its hinterland.  The traditional crafts and entrepreneurial skills of yore are being reinvented and reinvigorated today, just as the Lonely Planet  guidebook suggests:

"Cardigan has the feel of a town waking from its slumber. An important entrepôt and herring fishery in Elizabethan times, it declined with the coming of the railway and the silting up of the River Teifi in the 19th century. Now its surrounding natural beauty, hip craft shops, home-grown fashion labels, gourmet food stores and homely B&Bs are bringing it back to life. Its alternative arts scene is growing and the jumble of historical architecture that lines its streets and lanes has been given a new lease of life. Most importantly, Cardigan Castle has been restored and now serves as a hub of Welsh language, culture and performance."

The first castle was built in the vicinity by the Normans in 1093. Over the next 150 years many battles were fought and control of Cardigan changed hands no less than 16 times. In 1171, Lord Rhys ap Guffydd built a stone castle, using the latest techniques. Its fortified walls are what we see today on the banks of the Teifi, overlooking the ancient bridge that was fought over and captured many times by Welsh Princes, Norman knights and English kings.

To celebrate the completion of the castle, the Lord Rhys hosted a festival of music and poetry - the first recorded Eisteddfod.  This competitive arts festival is a uniquely Welsh tradition which still thrives locally and can be found wherever Welsh people have migrated to around the world. 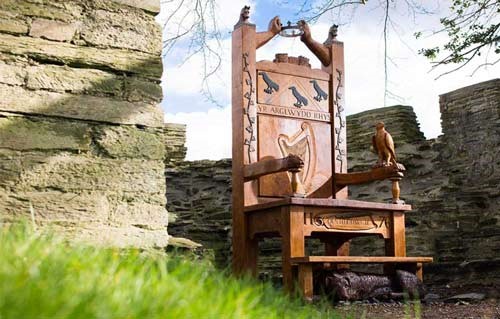 After falling into disrepair, Cardigan Castle was saved from utter ruin by the efforts of the local community and was opened to the public in 2015 after undergoing extensive restoration. On a visit to the castle today you can discover the castle and the town's 900 years of history and how it became a haven for wildlife. The castle's lawned garden is host to events and activities, including pop and folk concerts and heritage fairs.

You can meet, eat and stay overnight at the castle, and you can immerse yourself in Welsh culture if you choose, with harp playing tutorials and Welsh language lessons!

Henry VIII granted Cardigan its charter in 1543 and by the 18th century Cardigan was the most important seaport in southern Wales. It had a thriving herring and shipbuilding industry and its merchant fleet carried fish, slate, bricks, bark for tanning, corn and ale.

Cardigan was also a major embarkation point for migrants to the New World during the 19th century. The words on the riverside wall are a quote from a poem by contemporary Cardigan poet, Ceri Wyn Jones, recalling the comings and goings of the port. 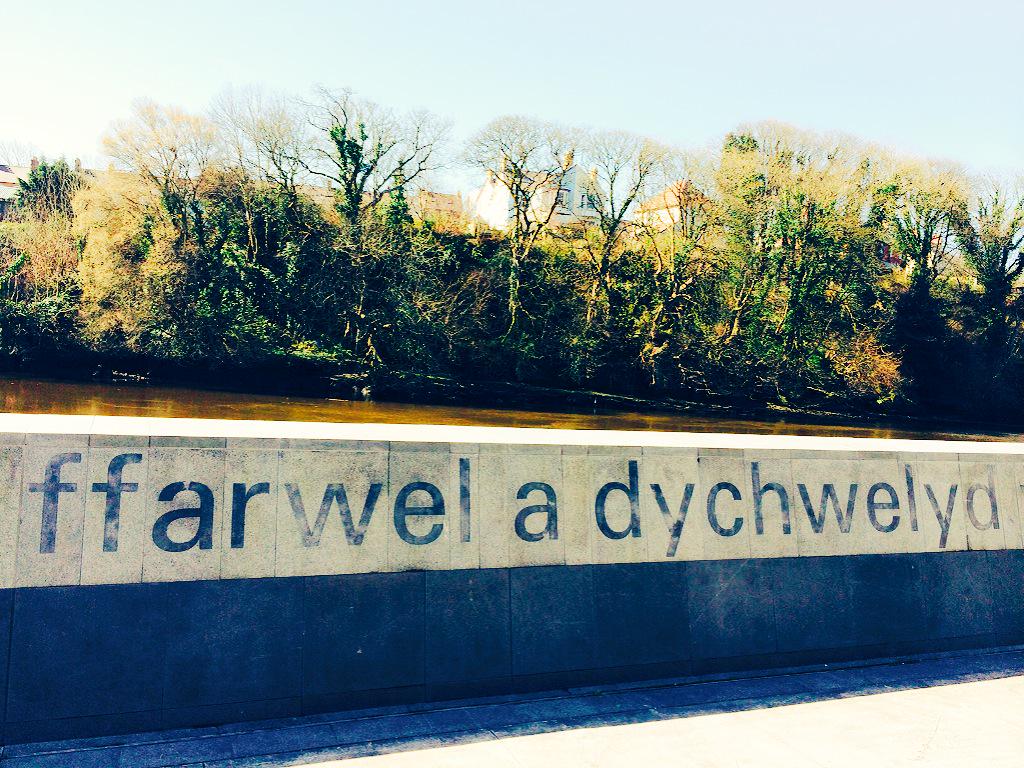 Many of Cardigan's buildings are Georgian, including the restored Castle House.  The town's oldest inn, the Black Lion on the High Street, was established in the 12th century and enlarged in the 17th century, whilst the history of the Red Lion, which is close to the riverside, goes back to the 1630s. Look carefully under Cardigan Bridge and you'll see some of the original 17th century arches below those built in the 18th century. The former goal at Cardigan, now a comfortable guesthouse, was one of the earliest buildings designed by the architect John Nash.

On the south bank of the river Teifi, the Victorian warehouses are now converted into shops, offices and apartments, whilst some of the pubs along the High Street date back to Georgian and Victorian days. The Guildhall and its Market​ Hall, opened in 1860, was the first municipal building to be built according to John Ruskin's design principles. 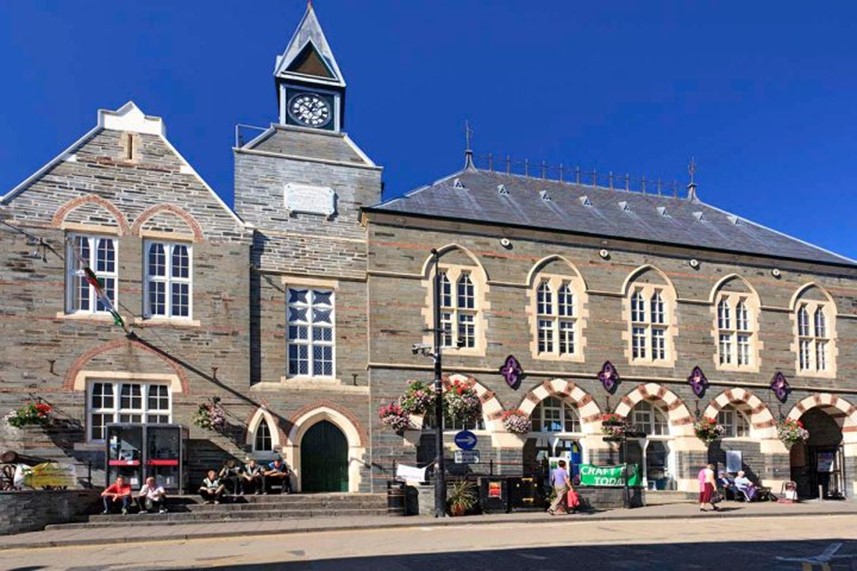 More contemporary buildings to note include the castle renovations and the eco-building of the Small World Theatre.

The town’s 'must see' events include Barley ​Saturday and the Creative Cardigan winter lantern parade. Barley Saturday is held in Cardigan on the last Saturday of April every year, celebrating traditional rural life with a parade of the area's finest horses and agricultural vehicles, whilst the lantern parade is the signal that Christmas is coming!

Cardigan has a busy arts scene with two theatres, and music held at several venues around town, including the Castle's grounds.  Theatr Mwldan​​ arts centre includes a cinema, gallery and café and presents a wide range of professional entertainment and arts events throughout the year. It is also the base of Gwyl Fawr - the town's eisteddfod, which has several concerts as well as musical, literary and dance competitions, held at the end of June. Along with Mwldan, St Mary's Church is the main base for the November 'Other Voices' festival concerts by contemporary, internationally known, Welsh musicians, whilst a series of smaller venues from cellar bars to art galleries and bakeries create a great atmosphere along the festival's music trail around town.

Nearby is the Small World Theatre, housed in an octagonal eco-friendly building.  This is the home of Cardigan's giant puppet characters, including Lord Rhys, Bendigeidfran and Lady Augusta. Here you can join yoga and circus skills classes, performances, events and workshops, many with a focus on international links and sustainability.

Cardigan Castle is a beautiful backdrop for concerts, with the stage on the front lawn having hosted a number of famous names from opera to folk, rock and pop.

The Guildhall is the venue for many community events, including traditional tea dances. Within the complex, the Corn Exchange Gallery hosts shows by local and well known artists.

Studio 3 is a gallery and workshop space where all kinds of craft courses are held as well as changing exhibitions of art.

Oriel Canfas, opposite the castle, hosts exhibitions by contemporary artists, and Custom House Galley, tucked away in a street behind the castle is a shop and exhibition galley.

A browse around Cardigan's shops and galleries would not be complete without a visit to Awen Teifi, the town's Welsh language bookshop, where there is also a choice of locally themed paintings, including portraits and scenes by Aneurin Jones.

Also look out for when the Cardigan 'Cardigan' is on display - a giant knitted cardigan depicting the town's history in wool.

Shopping for art, craft, food and drink in Cardigan

Cardigan's indoor market is in the historic Guildhall building in the centre of town. The market hall, which is on two levels, was originally the town meat and dairy marketplace. Today, the market is a busy shopping area with over 50 stalls run by independent local traders. The Guildhall Market is open Monday to Saturday.

Cardigan has a vibrant contemporary arts scene, with theatres and galleries and a host of colourful events, interesting shopping at markets and independent shops and a great choice of cafes, pubs and restaurants.

Cardigan Castle is one of the oldest buildings in Cardigan, strategically placed overlooking the first crossing point on the River Teifi.

You can walk or cycle upriver of Cardigan along the Teifi to Cilgerran village and Cilgerran Castle and the dramatic river gorge.

Across the estuary to Cardigan is the village and ruined abbey of St Dogmael's where you can also see one of the last working flour mills in Wales.

Explore Cardigan along the town trail, which will introduce you to the history and interesting hidden spots around town.

There is also a town app which will guide you, which also includes a guide to the town's shops.