Wildlife spotting on land and sea

A wildlife spotting boat trip in the company of wildlife experts is a top Ceredigion coast experience as the inshore waters of Cardigan Bay's Special Area of Conservation are home to Europe's largest population of bottlenose dolphins.

Spot a variety of wildlife, including dolphins, seals, porpoises, turtles and unusual species such as the sunfish. Ceredigion's licenced boat trip operators are carefully trained and abide by the Cardigan Bay Marine Code. 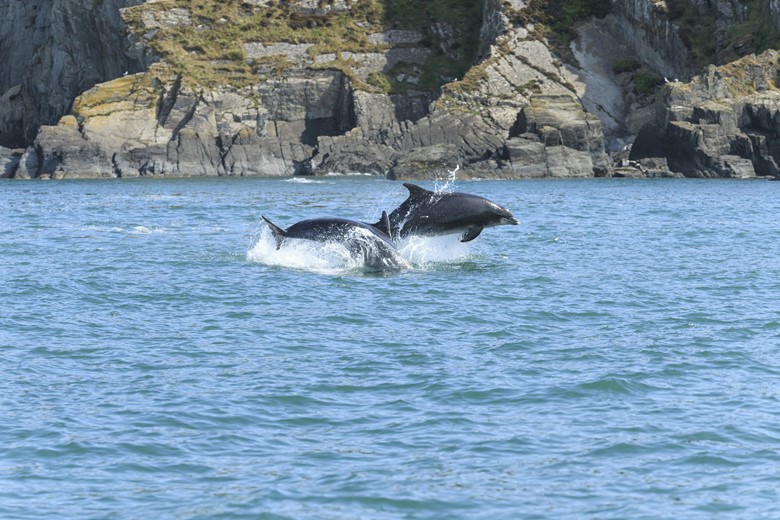 New Quay is one of the 'hotspots' for spotting Cardigan bay's bottlenose dolphins, from the shore as well as from a guided boat trip. Both the Wildlife Trust of South West Wales and the Seawatch foundation have a base in New Quay, and scientists often accompany trippers on the boats to survey the population of dolphins and porpoises that are semi resident in Cardigan Bay.

There is choice of trips available, with experienced boat skippers and guides who know the best and most appropriate places to spot wildlife, and how to handle the craft for the best view without intruding on the animals and causing a disturbance.​

What to look out for on the Ceredigion coast 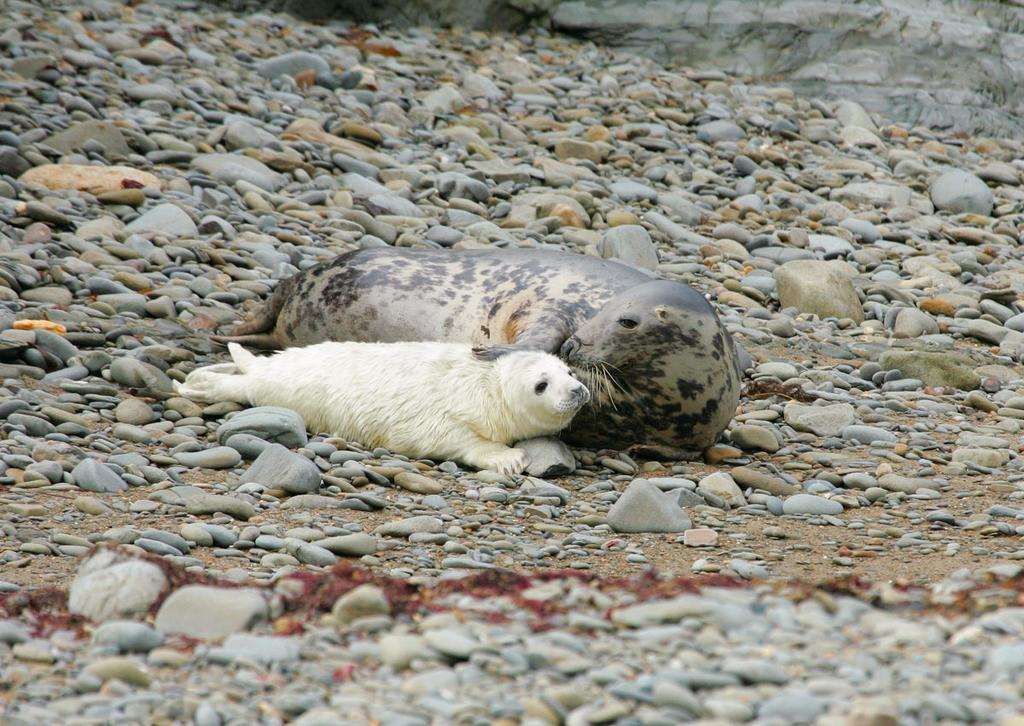 Atlantic Grey Seals like Ceredigion's secluded coves and sea caves, especially when the female 'cows' need peace to give birth and rear their young pups in autumn. Seals can often be seen from the coast path, especially around Mwnt, Cwmtydu and Bird Rock near New Quay.   Many caves and waterfalls are best and safely viewed from a boat - there are  regular trips are available (see panel). 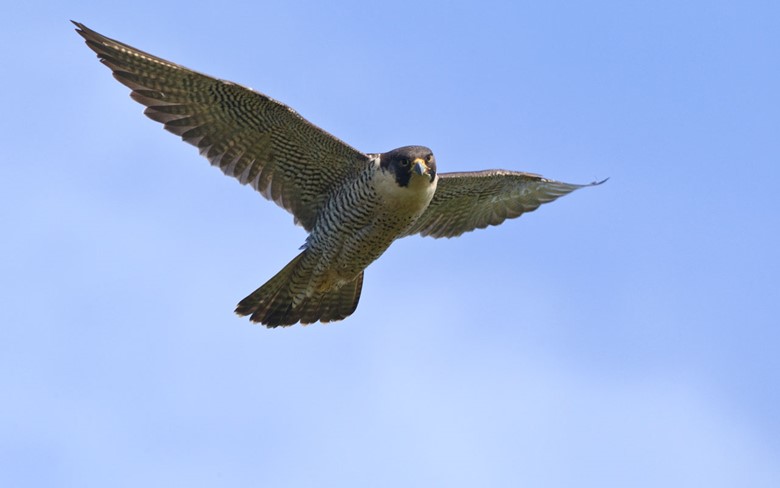 Aptly named Bird's Rock, on the Ceredigion coast path just south of New Quay, is one of the best places to see Ceredigion's marine wildlife, including grey seals and bottlenose dolphins as well as the colonies of guillemots crowding onto the rocky ledges. 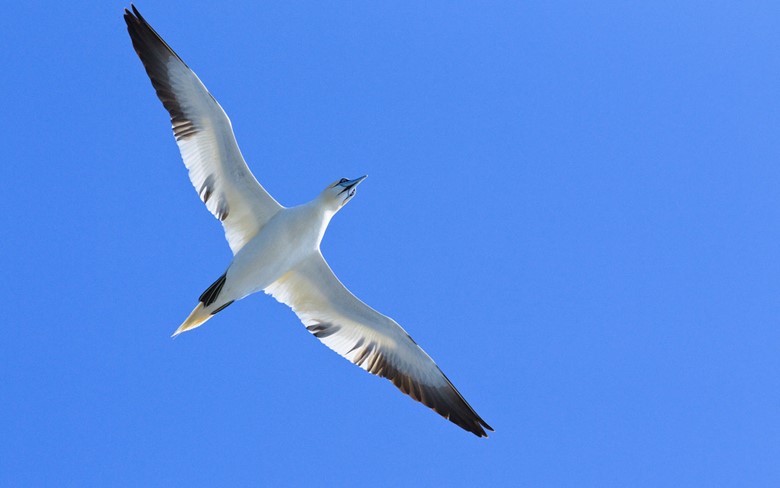 Other birds to look out for along the Ceredigion coast include razorbills, kittiwake, fulmar, shag and gannets, the UK’s largest seabirds. With a six foot wing span, they make a spectacular sight as they dive for fish.

Look out too for the Chough, the rare crow with  its distinctive red beak and legs.   The sea cliffs are also the haunt of Britain's fastest bird -peregrine falcons can reach speeds of 200mph. 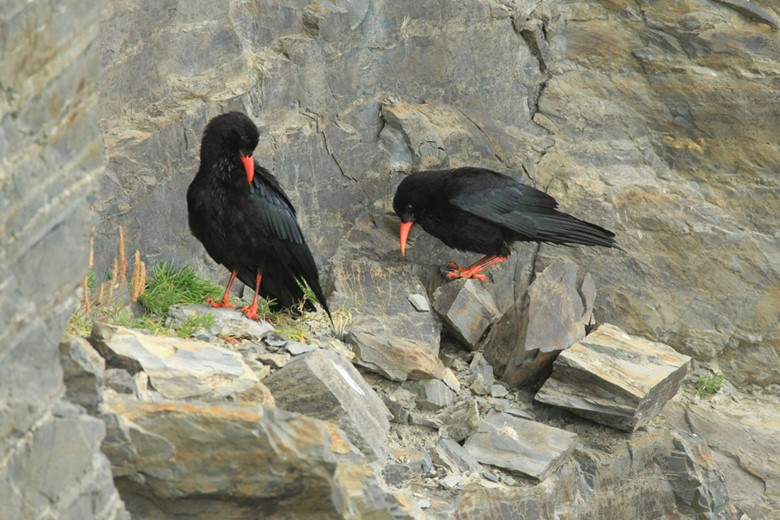 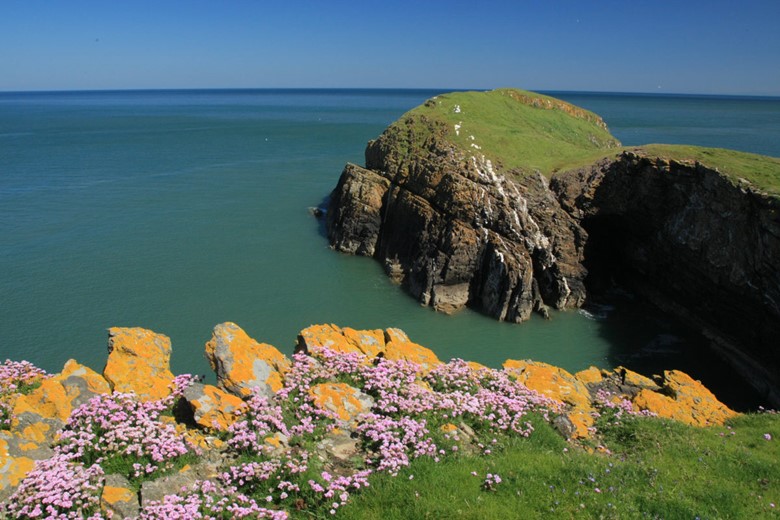 The combination of lichen, plants, cliffs and sea are a photographers delight.  At Ynys Lochtyn, just to the north of Llangrannog, the carpets of bluebell-like spring squilla (scilla verna) can be seen in the short grass of the cliff edge as well as cloud like tufts of thrift.  Orchids can also be spotted in many coastal meadows. 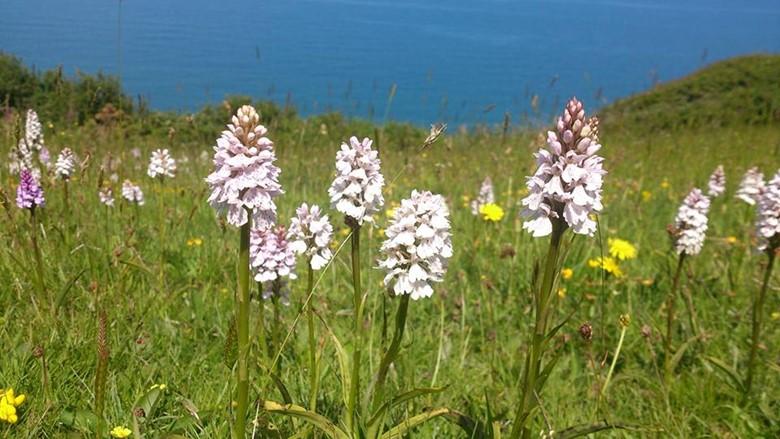 To protect the very special wildlife of Cardigan Bay, we recommend that you only book with licenced boat trip operators. Crew are  carefully trained to avoid disturbing the animals and follow the Ceredigion Marine Code of Conduct

Do not, under any circumstances, approach dolphins or other wildlife in your own vessel, including PWCs (jetskis), sailing boats, kayaks or any other water based craft such as windsurfers and SUPs. 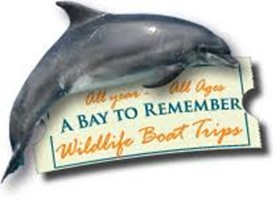 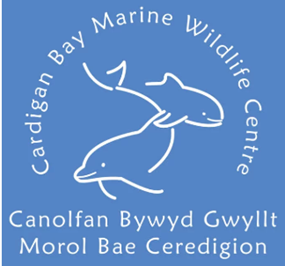 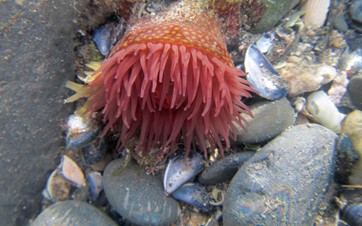 Most of Ceredigion's beaches have rockpools to explore where you will find small fish, crabs, anemonies, starfish and shellfish like limpets and periwinkles.  There are mermaid's purses and all kinds of seaweeds to identify too.

Please respect and protect coastal wildlife. Follow the guidelines for crabbing and rockpooling. 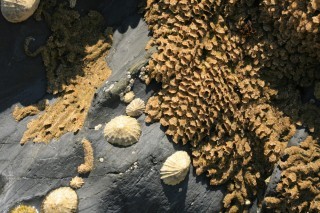 There are guided rockpooling and other beach activities available with the Wildlife Trust of South and West Wales, the council's wildlife officer based at the Boat Place in New Quay in summer - check the Discover Ceredigion events list or the Wildlife's Trust's website.

There are also guided foraging walks and events when you can learn what's what, when and where to find wild treats, and even how to cook and eat them. 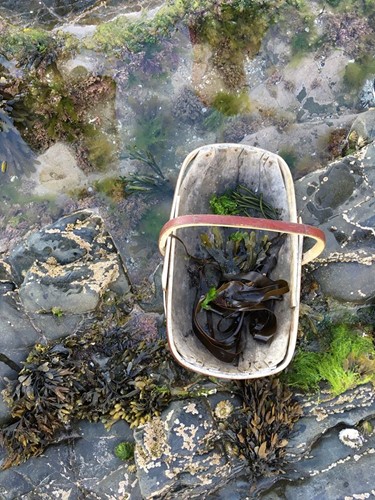 and the Wildlife Trust South for and West Wales

Do keep an eye on the tide if you're out rockpooling or foraging along the shore.

What are Special Areas of Conservation and Special Protected areas?

Ceredigion's coast has not one, but three Special Areas of Conservation.

Home to the biggest population in Europe of bottlenose dolphins, the Cardigan Bay SAC extends along almost 20 kilometres of coast and protects wildlife in 1000 square kilometres of the Irish Sea.

The northern coast of Ceredigion, from Sarn Cynfelyn is protected under the Pen Llŷn and Sarnau SAC.

Covering the whole bay area between north Pembrokeshire and the Llŷn peninsula is the West Wales Marine SAC.

The UNESCO Man and Biosphere programme has recognised the Dyfi river catchment and its surrounding area, including Aberystwyth, as a Biosphere - an area of world importance for the balance being sought for the environment, culture and economy.