enroute to Devil's Bridge with the Vale of Rheidol railway

From source to sea along the Rheidol river

The river Rheidol rises at Llyn Llygad Rheidol (the lake of the eye of the Rheidol) on the slopes of Pumlumon mountain, the highest point in the Cambrian Mountains. The Rheidol has one of the shortest, steepest descents in Wales, through a dramatic woodland landscape. 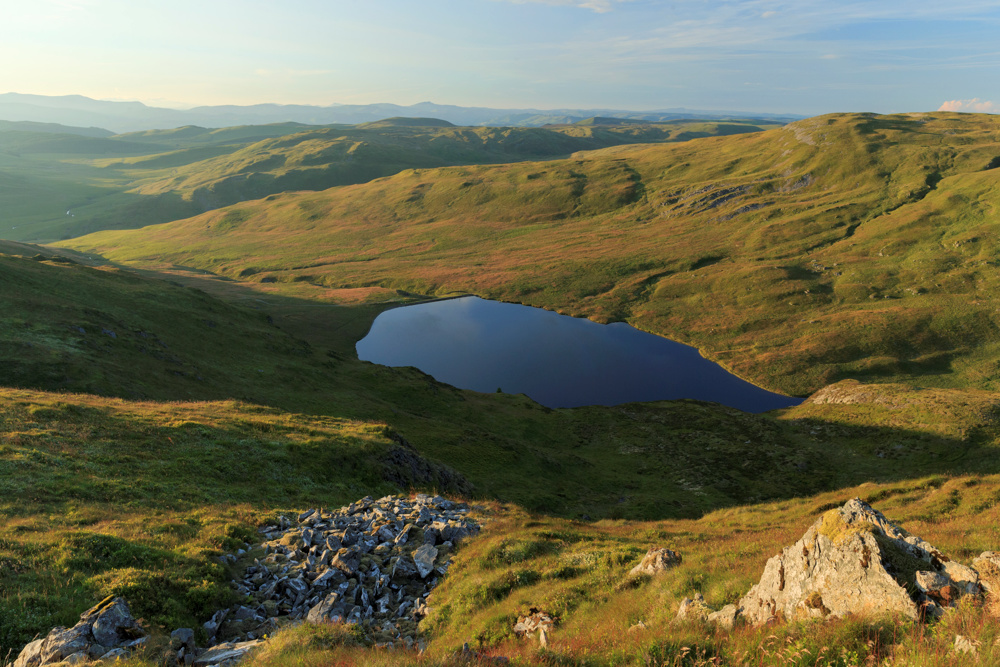 A legend tells of how the mountain king sent forth his three daughters – the rivers Severn, Wye and Rheidol. Each took different routes to the sea – the severn rose early and followed a long meandering route, the Wye a similar but shorter route, while the Rheidol, rising late, rushed down the shortest route it could, tripping and leaping all the way to Cardigan Bay.

The Rheidol's catchment is the basis of the huge, 60 square mile (162 square kilometers) Cwm Rheidol hydro-electric scheme, which includes the reservoirs of Nant y Moch, Dinas and Rheidol, which are linked by a series of aqueducts and pipes. The power station system is the largest of its kind in Wales and England. Generating renewable energy by using the rainwater that falls on the surrounding mountains, the reservoir system also helps regulate the flow of the river, protecting the lower reaches from flooding. 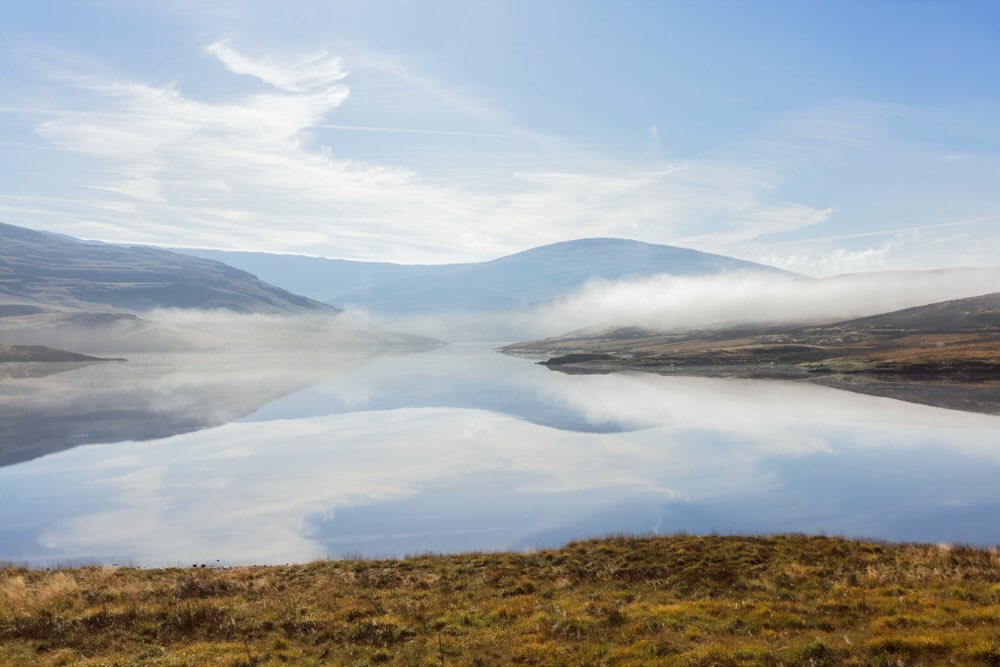 From Nant y Moch reservoir the river flows through the village of Ponterwyd, before rushing into a steep sided gorge clad in ancient Welsh oak woodland, plunging over the beautiful Gyfarllwyd Falls, which you can see through the trees from Devil's Bridge.

The only crossing point between Ponterwyd and Devil's Bridge is Parson's Bridge, used by a plucky parson as a short cut across the gorge to the ancient church of Ysbyty Cynfyn. Sixpence a day was paid to a man to maintain the bridge which was then a single plank suspended by chains from the rocky sides of the gorge. When it was replaced in the 20th century, the new bridge was lifted into place by helicopters. 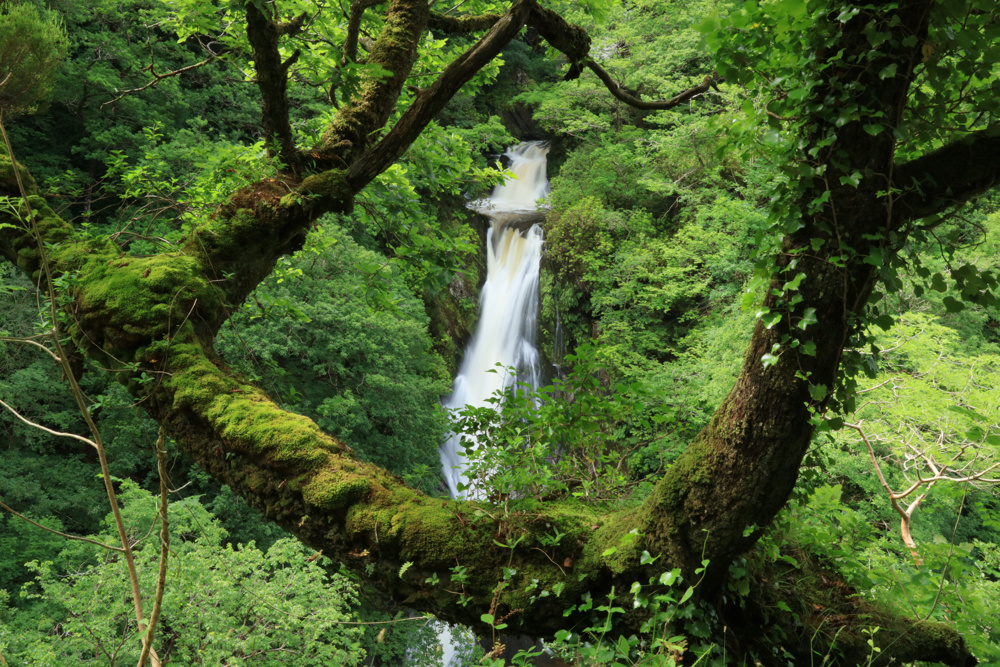 At Devil's Bridge the Rheidol is joined by one of its many tributaries - the powerful Afon Mynach - which descends dramatically over a series of rocky pools to form one of the most spectacular waterfalls in Wales. Spanning the falls are three bridges, built one on top of the other. According to legend, the original bridge was constructed by the Devil himself, as it was too difficult for mortals to build.

One of the best ways to visit Devil’s Bridge is to travel on the narrow-gauge Vale of Rheidol Railway which runs between Aberystwyth and Devil’s Bridge. Originally intended to transport metal ore from the mines and timber from the forest plantations of the Cambrian Mountains. As the railway makes its way up the valley, the lakes and meanders of the lower river  give way to steep wooded slopes. You'll spot a shape, known locally as 'the stag', coloured with the mineral in the mine spoil. It is an unusual scheduled ancient monument and one of only two of its kind ​in the UK.​​

Gently to the coast

Once it has tumbled out of the steep, wooded gorge and over the Rheidol falls, the river changes character soon after it leaves the last of the reservoirs. On its banks is the Rheidol Power Station and fish nursery, where trout are bred to populate the upper reservoirs and the Rheidol itself. Upstream of the power station is a fish ladder that was cut into the rock to bypass the Rheidol Falls. The 14 pools of the ladder rise over 6 metres, providing new, safe spawning grounds for the fish.

To learn more about the power station and the landscape that that feeds it, visit the Statkraft Rheidol Powerstation Visitor Station. Next door is the Magic of Life Butterfly House. Cross the Rheidol at the wier to reach the Aberffrwd station of the Vale of Rheidol Railway. As dusk falls, the water of the wier dances in the pretty floodlights. 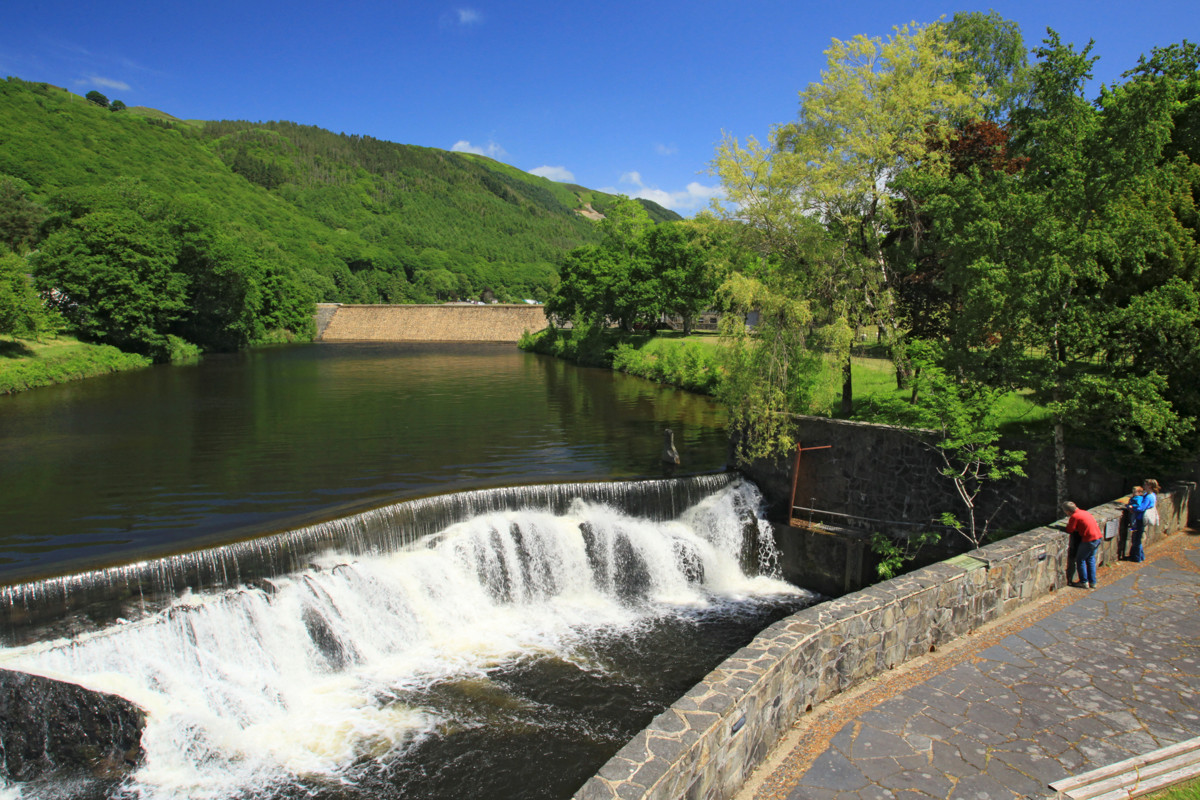 The area fascinated early tourists, who came to see the the silverlead mines scattered across the Cambrian Mountains as well as the falls of Devil's Bridge and the nearby Hafod Estate.  George Borrow, the traveller and author stayed at Ponterwyd, and described his visit in his book Wild Wales, which, since it was published in 1854, has never been out of print!

On the undulating block of land sandwiched between the steep-sided valley of the Rheidol to the south and east, and the open moorland to the north lies Ystumtuen. A mining community since at least the 17th century, its 21st century industry is windfarming. The crag above the Rheidol was occupied from an even earlier age. Castell Bwa Drain is one of the largest Iron Age settlements in the area, with views over the Rheidol valley, and all the way down to the coast.

Capel Bangor Penllwyn village lies where the Melindwr valley joins the Rheidol. The village pub is host to Wales' smallest brewery, whilst the nearby church of St David's is a peaceful place for contemplation just off the A44 road. Follow the road up the valley towards Ponterwyd, and call at the Bwlch Nant yr Arian Visitor Centre. Nant yr Arian is the 'silver stream'. The hillsides of the Rheidol and Melindwr valleys are peppered with silver leadmine adits and spoilheaps. Nearby at Llywernog, the Silver Mountain Experience gives you an insight into the life of a silver and lead miner. On the moorland above Llywernog, mountainbikers from the Bwlch Nant yr Arian centre practice their skills along both new tracks and those tramped on foot by generations of miners.

The Rheidol river meanders its way through lowland meadows on the final stretch of its journey to the sea.  At Aberystwyth, it flows under Trefechan bridge into the harbour to join the Ystwyth in the harbour. 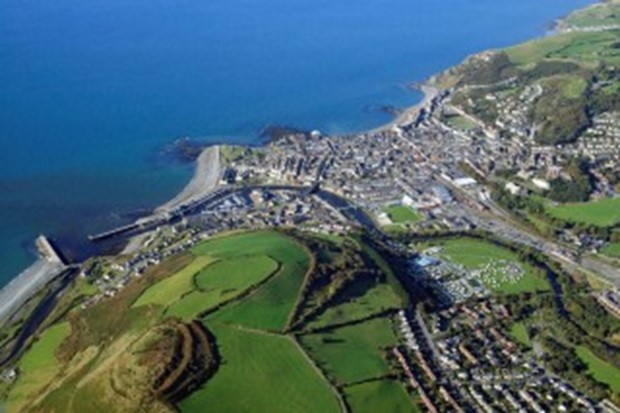 Pumlumon  -  five routes to the summit