Cardigan Bay - the coast of Ceredigion

Cardigan Bay is the largest bay on the Welsh coast. Cardigan Bay's wide sweep is made up of several smaller bays between the headlands of Pembrokeshire and the Llŷn Peninsula. As you travel along the Ceredigion coast, especially along the Ceredigion Coast Path, the whole of Cardigan Bay extends before you, with views as far as Snowdonia and Bardsey Island. On a clear day, the Wicklow Mountains can be seen from the summit of Pumlumon Fawr, Ceredigion's highest mountain. 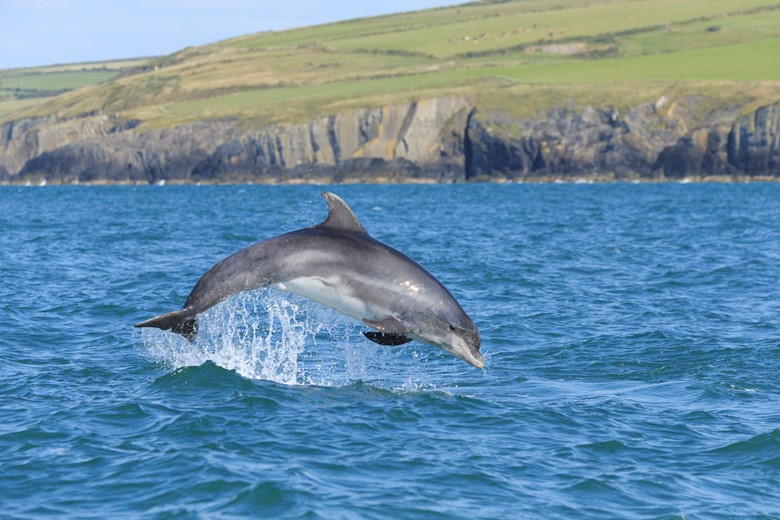 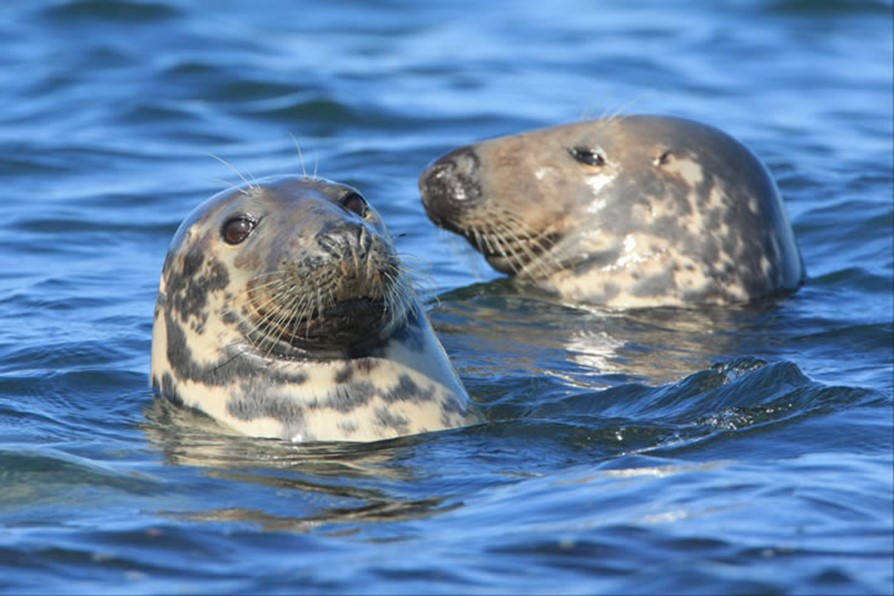 The southern banks of the Teifi estuary, are part of the the UK's only coastal National Park, whilst the northern coast of Ceredigion is protected under the Pen Llŷn and Sarnau SAC, which extends north along the coast of the Snowdonia National Park and the Llŷn Area of Outstanding Natural Beauty.  The catchment of the Dyfi, which forms the northern border of Ceredigion, and the coast as far as Aberystwyth, is a UNESCO Man and Biosphere reserve, recognised for its special landscape qualities, and the language and culture of its communities.

A feature of Ceredigion coast is the series of shingle ridges, the 'sarnau' or 'stone causeways'.  The most prominent is Sarn Cynfelyn which can be clearly seen from the Ceredigion Coast Path between Borth and Aberystwyth.  It extends out to sea for about 7 miles towards a point called Caer Wyddno (Gwyddno's Fort). The stone ridge of the 'sarn' (causeway) can be seen and landed on at low tide, but disappears again as the tide rises, as does Sarn Badrig (St Patrick's causeway) to the north, whilst Sarn Ddewi and Sarn Cadwgan are hidden under the waters of southern Cardigan Bay. 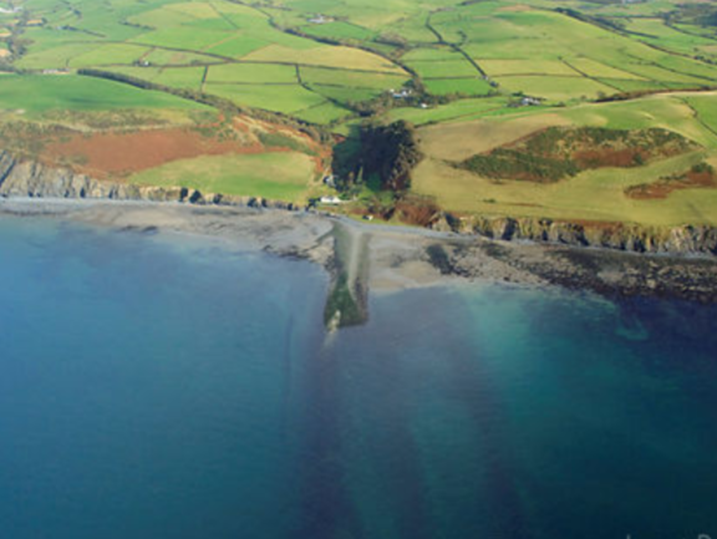 These 'sarnau' are moraines formed by receding ice sheets at the end of the last ice age, and their causeway like appearance may be the foundation of the legend of the lost lands of 'Cantre'r Gwaelod' (the 'sunken hundreds'), and the Irish lost City of Bannow. If you visit Borth or Ynyslas beach at low tide, especially after winter and spring storms when the sand is scoured from the beach, you'll find the remains of an ancient sunken forest and sometimes footprints from prehistoric times appear in the peat, only to disappear again. 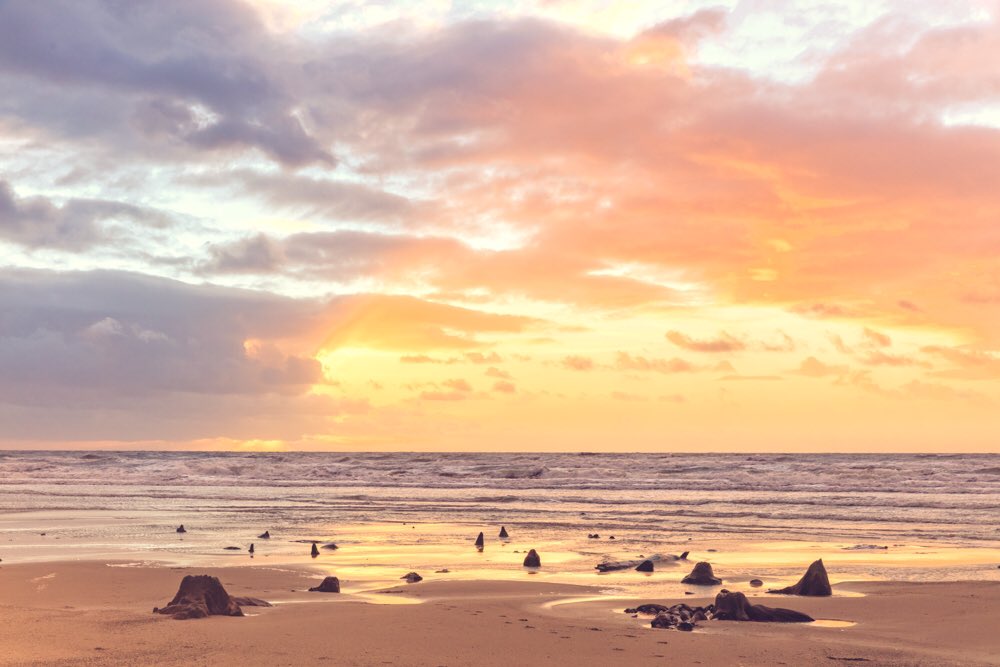 Ceredigion's coastal cliffs and river estuaries provide a home and resting place for a variety of rare birds, colourful plants and lichens, perfectly adapted to their habitat. Winter migrants including Greenland Geese stop on the Dyfi, and summer brings Ospreys, the sea eagles from Africa, to nest and feed on fish in the marshes.

But the cliffs and rocks themselves deserve a closer look too, as the contorted folds and faults have been eroded and sculpted by the wind and sea to create sea caves and distinctive rock features such as Carreg Bica at Llangrannog and the Monk's Cave, south of Aberystwyth. 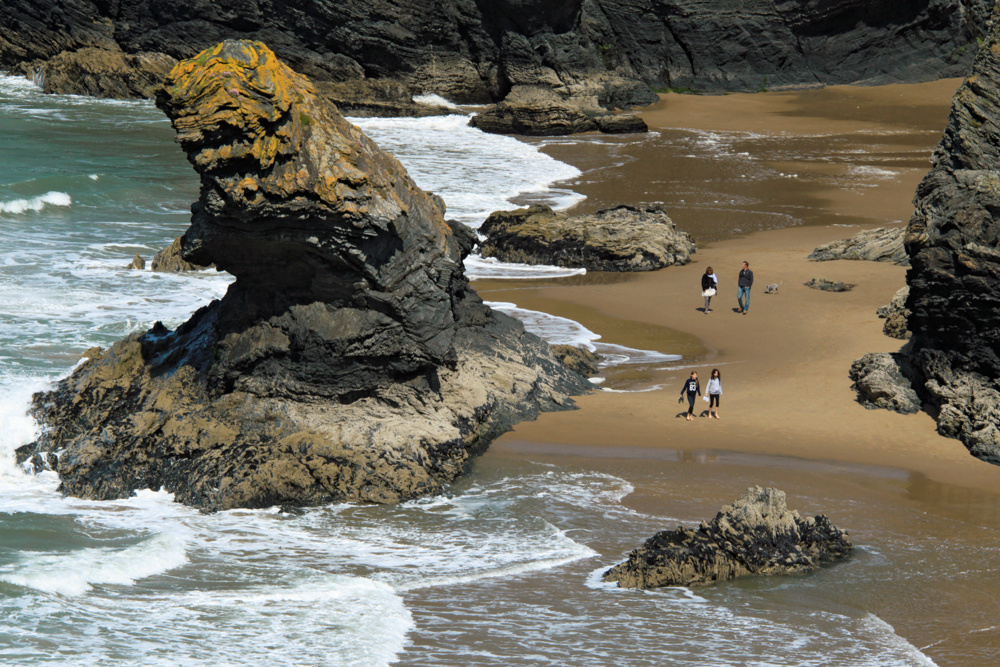 The Ceredigion coast has exceptional wildlife and a rich historical legacy which includes harbours, abandoned limekilns and several hillforts - mystical places to visit and imagine the past as you gaze across the sea and watch the sun set over the horizon.

Spot the limekilns along the Ceredigion Coast Path at Cwmtydu, Mwnt, Llangrannog and near Sarn Cynfelyn near Clarach.  A series of four kilns - testimony to a thriving trade between mariners and farmers - can be seen between Llanon Llansanffraid and Llanrhystyd. 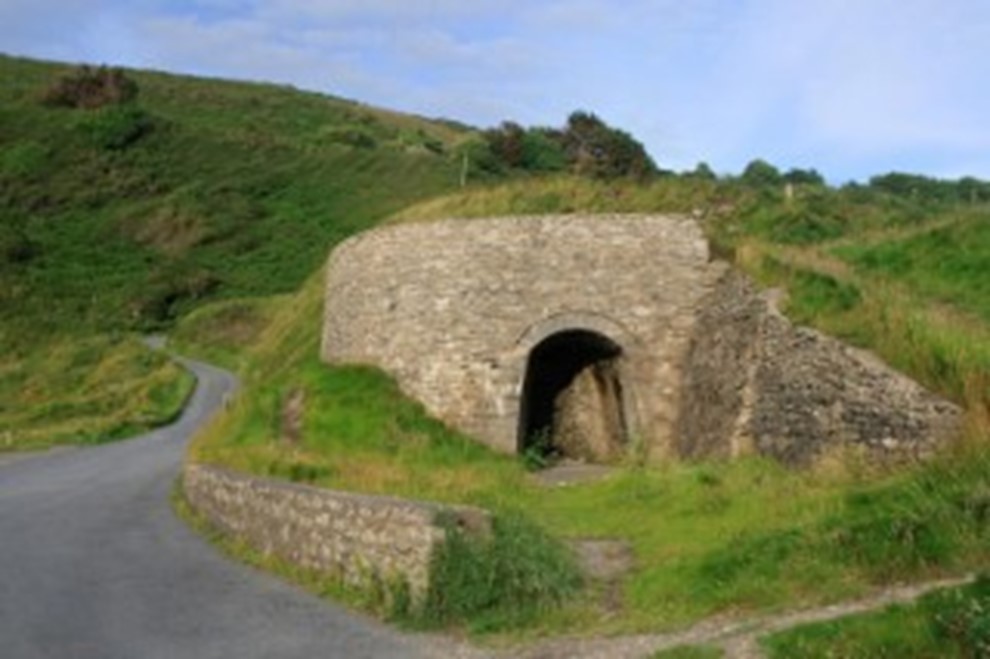 Visit Pendinas hillfort that lies between the two rivers at Aberystwyth for one of the best panoramas of Cardigan Bay from the largest Iron Age defensive site along the coast. You can follow the Ceredigion Coast Path north from Llangrannog to discover Pen y Badell, 'top of the frying pan' - a name that perfectly describes the distinctive shape of the peninsula and hill upon which a promontory fort lies. 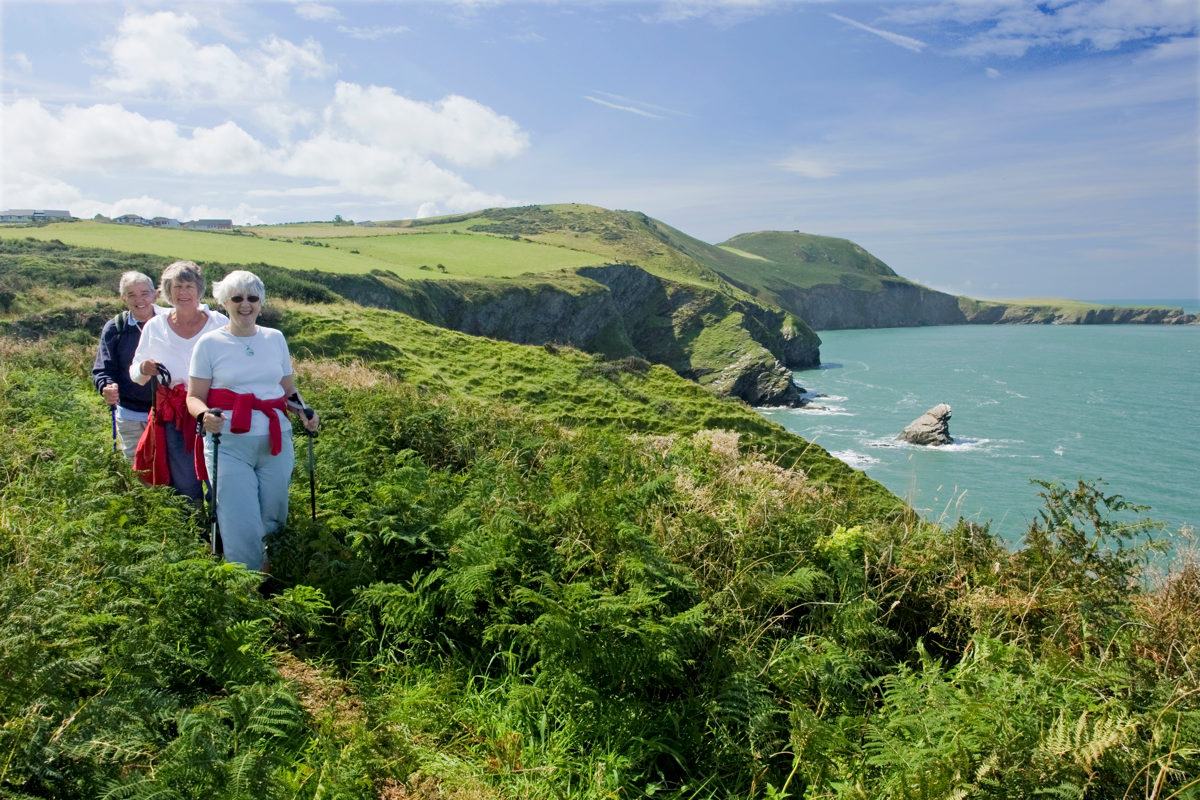 Follow the Ceredigion Coast Path to discover secret places such as Castell Bach - literally 'little castle' - before the sea finally snatches it away forever. 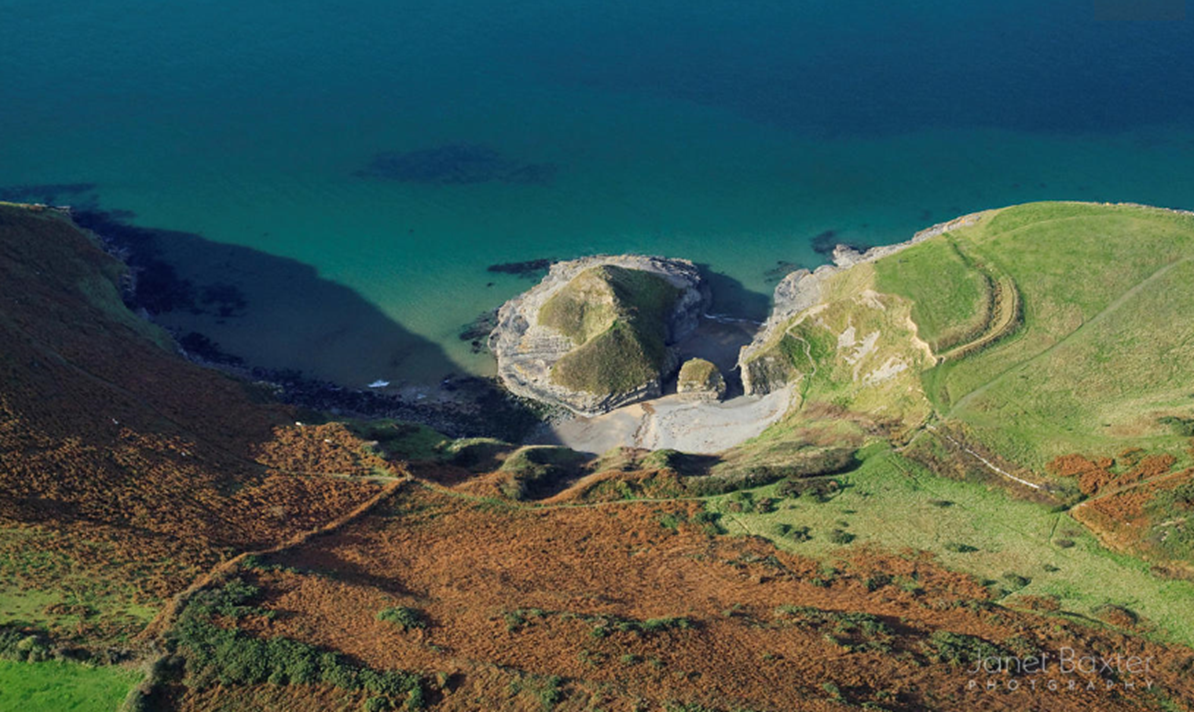 Where is Cardigan Bay? 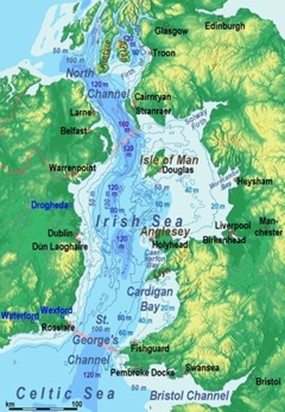 Cardigan Bay extends across the broad, shallow eastern edge of the Irish Sea, from Pembrokeshire to the Llŷn Peninsula.

On navigation charts, the bay is identified with the largest port on the western seaboard until the 19th century - Cardigan.

Its Welsh name is Bae Ceredigion.

To explore Cardigan Bay, you can follow the Wales Coastal Way, a 180 mile (290km) route that links St David's in Pembrokeshire and Aberdaron at the tip of the Llyn Peninsula.

The Wales Coastal Way is one of three national routes that will introduce you to this part of Wales.

Coastal and seaside towns and villages

A boat trip is a great way to see the Ceredigion coastline from a different perspective, with secret caves and beaches to discover and a variety of wildlife to spot including seabird colonies, dolphins, seals, porpoises, turtles and unusual species such as the sunfish.

Wildlife spotting boat trips are available from several locations along the Cardigan Bay coast of Ceredigion coast.  There are wildlife centres to visit too, with observation points, guided walks and other activities and events.

The waters of Cardigan Bay are rich in fish and seafood, sustainably managed and enjoyed in restaurants across the UK and Europe as well as locally in Ceredigion.

Visit one of the Ceredigion food festivals that specialise in fish and seafood to have fun discovering new tastes. You'll have a great opportunity to chat and question well known and talented chefs while enjoying the fruits of the waters of Cardigan Bay when the produce is at its best.

You will also find stalls at Ceredigion farmers markets that offer a taste of fish and seafood too. Find out more about the heritage and Ceredigion's food and drink scene in the Food and Drink pages

Get to know the Welsh coastline by taking a road trip along our Coastal Way. It’s part of the Wales Way, a recently launched family of three national routes – the Coastal Way, the Cambrian Way and the North Wales Way – that guide you through some of our country’s most striking scenery. Each​ route is designed to introduce visitors to the best of Wales. They’re packed with great things to see and do as you travel, giving you the local knowledge to venture off the beaten path and create your very own Welsh adventure.

They say travel broadens the mind. But some journeys do much more. They let you see the world through different eyes. To see a living connection with nature. To see history and legend come together in spiritual places. To see balance and harmony in our busy world.

These journeys are Celtic Routes.

For the ancients, every mountain, river, tree and stone was imbued with a natural spirit. They lived in harmony with these spirits and created a way of life that goes with the natural grain.  This way of life lives on in West Wales and Ireland’s Ancient East.

Celtic Routes is a branded collection of tourism experiences that encourages travellers to Ireland and Wales to discover their Celtic spirit by offering a number of immersive and authentic Celtic experiences in West Wales and South East Ireland.

To find out more, visit the Celtic Routes website