According to the UK’s official mapping agency, The Ordnance Survey, the centre point of Wales is on a hillside above the upper reaches of the Yswyth river in Cwmystwyth. 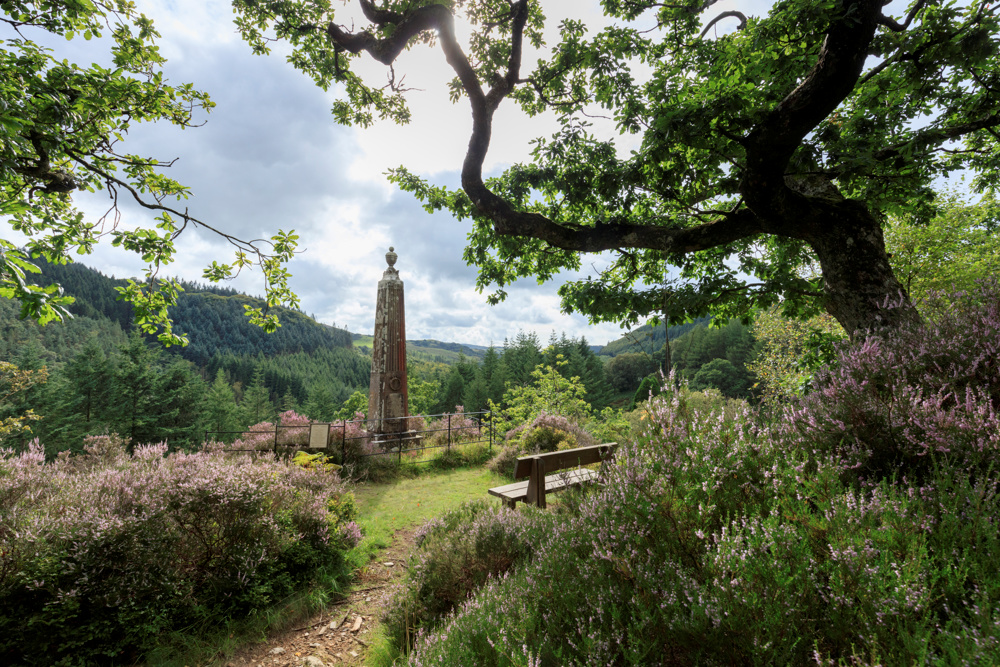 Hafod - the pastoral and the Picturesque landscape

Thomas Johnes, a well connected gentleman, who, after completing an extended Grand Tour of Europe,  became the Member of Parliament for the borough of Cardigan. He inherited Hafod in 1780, and moved there in 1783, and set about building a new Gothick-style mansion, surrounded by woods, cascades and rocks. Johnes laid out walks and placed built features to enhance the landscaped views, in the Picturesque manner, the new fashionable idea for landscaping.

Hafod was one of the first houses in Wales to be opened to the public on a formal basis with published opening times and a ticketing system and it became well known after the publication of George Cumberland's book 'An Attempt to Describe Hafod' (1795). Hafod soon became an essential destination for the nobility of the day as tourists to Wales. 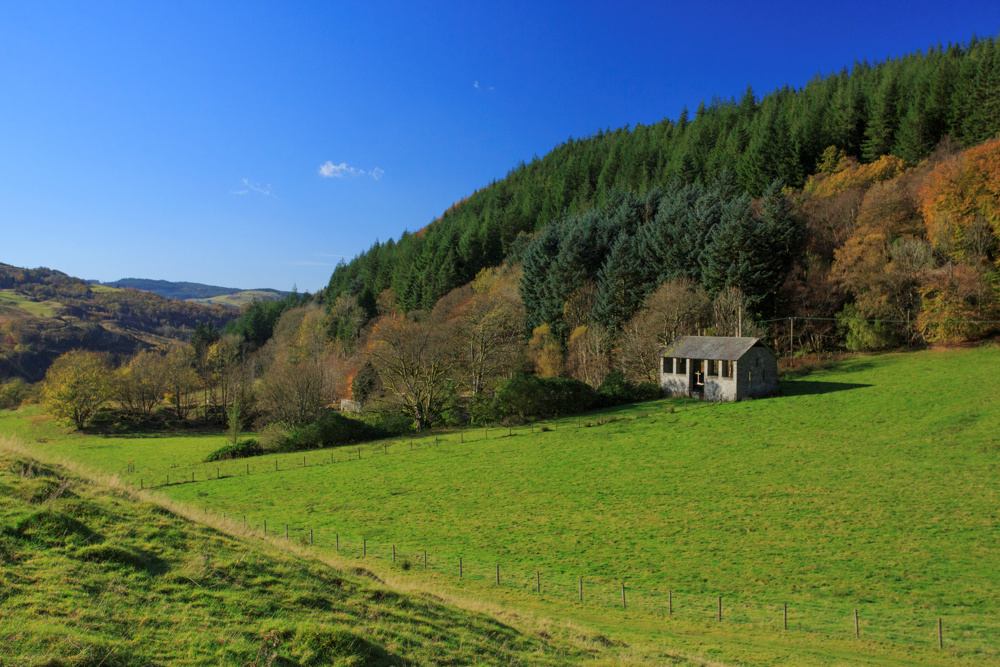 Johnes also provided accommodation for visitors in a cottage on the estate ( which is still available to rent today) and built the Hafod Arms Inn in  at Devil's Bridge, where the waterfalls became a major visitor attraction. The walks, bridges and other built structures are being painstakingly restored by a dedicated group of volunteers working with a small team of Hafod Trust staff.

Johnes planned an elaborate mansion at Hafod,  designed by Thomas Baldwin, complete with glass conservatory.  Welsh manuscripts and books about natural history collected by Johnes were housed in an elegant octagonal library designed by John Nash.   Shortly after, in one of many tragic events that beset Hafod, the mansion and its library were burnt down with only the walls  left standing.  Work started on a second mansion building, but remained unfinished for decades. By the Second World War, the site had become derelict, and what remained was dynamited by the Forestry Commission in 1958.

A working landscape - past and future

Thomas Johnes developed the estate at Hafod, planting millions of trees as well as carrying out experiments in new agricultural practices and introducing new breeds of farm animals to the county. 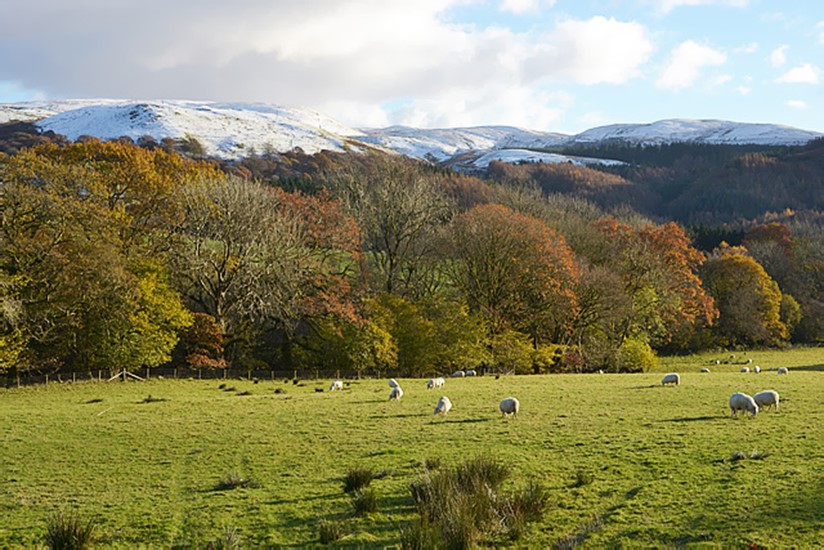 Forty dairy cows were imported from the Netherlands which Johnes referred to as his "Dutch ladies".  By 1800 the Hafod dairy was producing approximately four tons of cheese and 1,200 pounds (540 kg) of butter.

Thomas Johnes published 'A Cardiganshire Landlord's Advice to his Tenants' in 1790 and a Welsh version was published soon after. He encouraged his tenants to improve their farming and offered prizes for good crops. Thomas Johnes himself obtained the Royal Society of Arts medal five times for his tree plantations. He was also one of the chief supporters of the Cardiganshire Agricultural Society, founded in 1784.

The University of Aberystwyth upland research centre is located at Pwllpeiran, once part of the Hafod Estate. Established in the 1930s, ​scientists within the Institute carry out practical research into water, soil and carbon management, ecology, animal science, biorenewables and plant breeding, including pioneering work on producing galantamine, a pharmaceutical compound produced from daffodil plants that is an approved treatment for Alzheimer’s disease.

Look out for open days for an opportunity to learn more about the Centre's work.

One of the earliest mines in Wales was on the slopes of Cymwystwyth, where, only recently, a Bronze age gold ‘sun’ disc was found. Silver, lead and zinc had been mined in the valley since Roman times and reached a peak in the 18th century.

Mining for metal ores in the Cambrian Mountains only ceased during the 20th century, having reached a peak in the 18th and 19th centuries. Today, the old mines stand silent and are a proud testimony to the many that once worked there.

The village of Pont-Rhyd-y-Groes, often described as ‘Little Switzerland, ’ is perched in woods above the Ystwyth gorge. Remains of its industrial past include a large restored waterwheel, a miners bridge over the gorge, a counting house, as well as pretty rows of miners cottages.

Below the gorge at Pontrhydygroes the river starts braiding through gravel sandbanks before widening and winding its way across rich agricultural land between Trawsgoed and Llanilar.

The rivers in the area have swapped beds several times due to glacial activity. The course of the lower reaches of the Ystwyth follows a geological fault line, as does that of the Rheidol to the north.

The Ystwyth finally reaches the sea below the Iron Age hillfort of Pendinas, the original settlement overlooking the aber (mouth) of the Ystwyth. The Rheidol and the Ystwyth join at this point to form the present day harbour at Aberystwyth.​​ 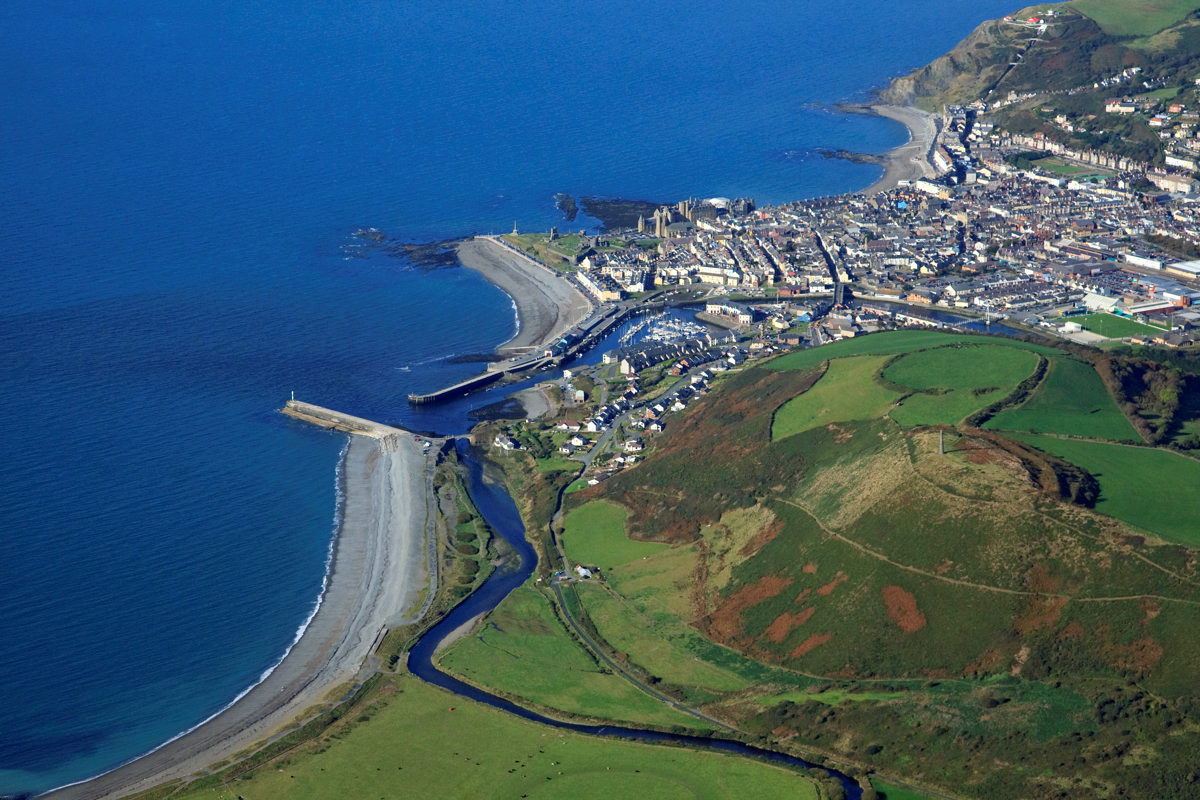 The powerful Anglo Norman baron, Gilbert de Clare,  built the first Aberystwyth castle at a strategic point overlooking the mouth of the Ystwyth at Tan-y-bwlch. It was one of several ring and bailey castles constructed as part of the invasion of Ceredigion from 1110. The deClare dynasty would play a major role in the Norman invasions of Wales and Ireland.

There are earlier fortifications along the Ystwyth valley.   The hillfort of Castell Grogwynion has commanding views over the Ystwyth valley, whilst the Romans chose to build an elegant villa - the most westerly in Britain  - at its fort at Trawsgoed - on the route of the Sarn Helen road between north and south Wales.

The Waterwheel and Miners Bridge at Pontrhydygroes

Cwmystwyth guide on Ordnance Survey' Get Outside'

The Spirit of the Cambrian Mountains metal miners

The centre point of Wales