King Arthur in a land of giants

Many of Ceredigion's distinctive landscape features - from waterfall pools to rocky outcrops on beaches - are explained in legends and local folk tales. Why not go for a hilltop walk, a riverside stroll or a beach adventure to seek out the landmarks that inspired these stories, and discover the varied landscapes of Ceredigion.

King Arthur and his knights are associated with several places across Ceredigion, from the coast of Cardigan Bay and the banks of the River Teifi to the ridges of the Cambrian Mountains. Some tales are full of humour and mischief, whilst others are of heroic feats and giant slaying.

King Arthur and his Knights

One tale tells how King Arthur was once caught trying to steal the cloak of St Padarn. The saint caused the ground to open up and swallow Arthur. The king was captive underground until he apologised!

King Arthur’s nephew, Gwalchmai, (Gawain) killed three murderous Ceredigion giants. Maelor Gawr, a giant who lived near Aberystwyth was captured and granted his final request - to blow his horn three times. Maelor’s son, Cornippyn, was out hunting and heard the sound of his father’s horn, rode at breakneck speed to the rescue, leaping over the River Ystwyth, but was slain in the ensuing battle.  That night, Maelor’s other cruel sons, Crugyn and Bwba, were also mysteriously killed. 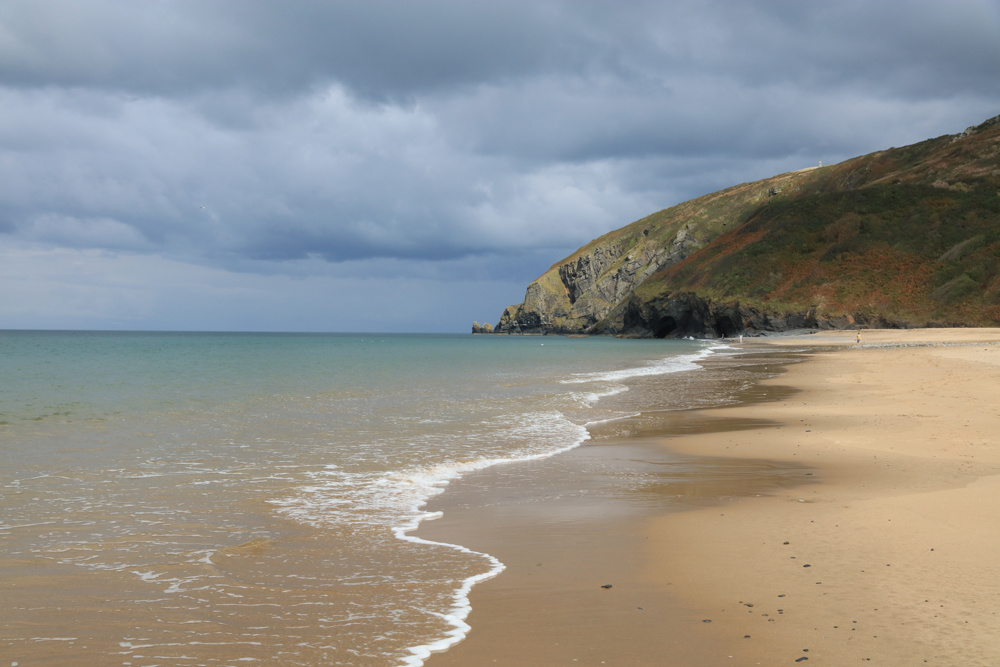 Geraint, another of King Arthur’s knights, celebrated in Tennyson’s poem Geraint and Enid, is reputedly buried at Penbryn, near the site where he was killed at the battle of Llongborth. His fortress was Dungeraint, where, it is said,  the castle of Cilgerran now stands in the Teifi Valley.

Crannog, the saint that established an early church at Llangrannog, is also associated with places in Devon and Cornwall.  He travelled across the Celtic seas with a portable altar, and according to a West Country legend, Carannog (or Carantoc) lost his precious  altar as he crossed the Severn estuary, and went to King Arthur to seek his help to recover the altar. In return Arthur asked him to tame a dragon that was troubling the neighbourhood. Carantoc prayed and the dragon came to him, and humbly let him lead him away, gently, like a lamb. 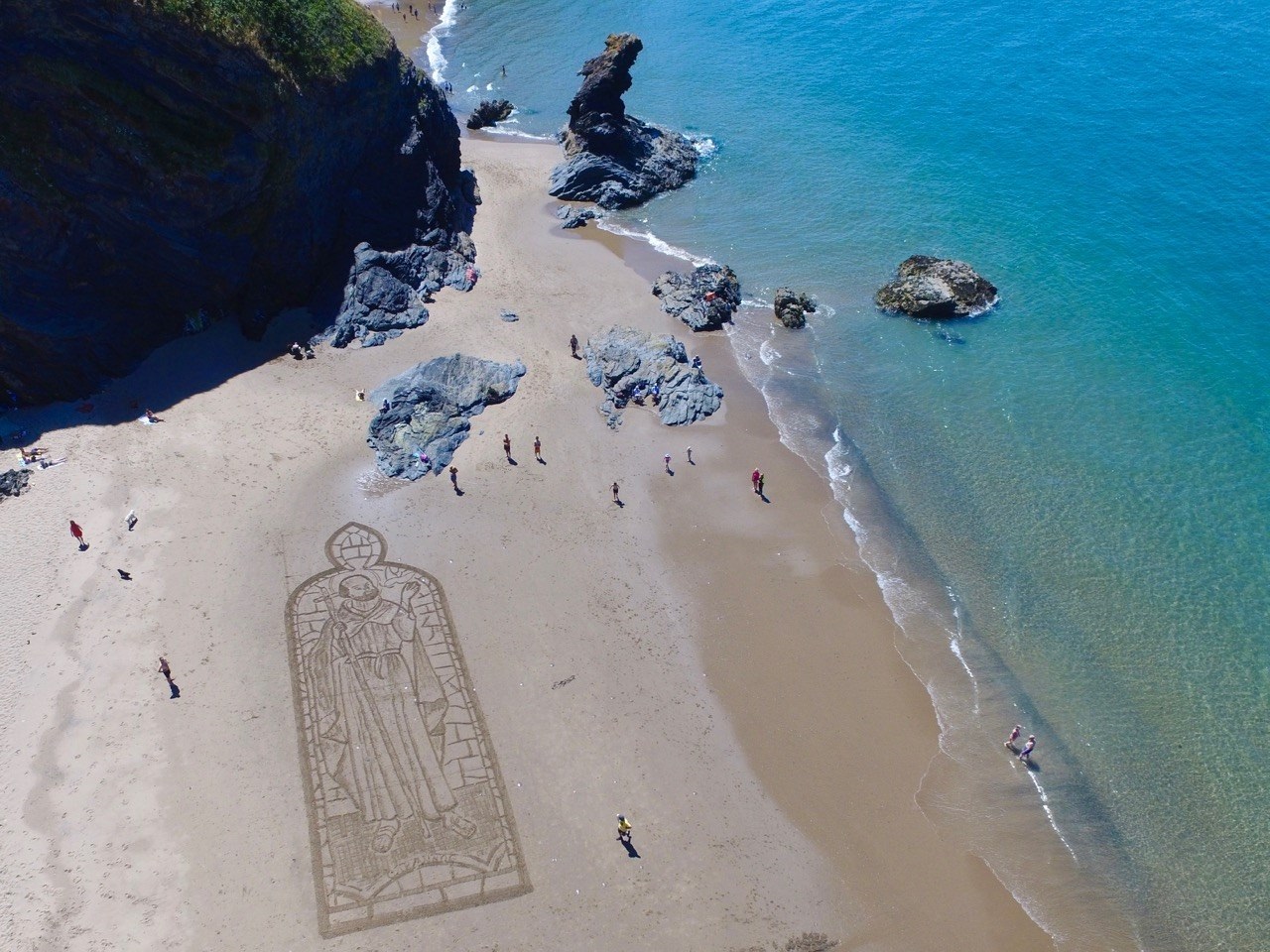 Giants - from head to foot

At Llangrannog there is a rocky outcrop on the beach, called Carreg Bica. According to legend, Bica was a local giant who suffered from toothache. One version of the legend tells how he spat the offending tooth out in anger, and it fell into the sand on Llangrannog beach. Imagine the size of Bica when you see the weathered rock between the two Llangrannog beaches of today.

Another version of the tale explains the nearby Ynys Lochtyn.  As a reward for helping Bica to remove his bad tooth, Lochtyn demanded an island for himself. Bica created an island for Lochtyn by running his finger along the land on the horizon. The peninsula just north of Llangrannog, with a tiny island at its end is known as Ynys Lochtyn.

Not far away, at Troed y Rhiw, there is a stone, which according to tradition was a pebble that was thrown by a giant from his clog.

It does make you sympathise with giants - even bad tempered ones - doesn't it!

A more pleasant experience for our giants is an idyllic spot in the Cambrian Mountains where there's a waterfall with a deep pool, which, according to legend, is where another giant used to wash his hands.  This is near the Teifi Pools above Pontrhydfendigiad, where there's a very human sized bothy on the banks of the Claerddu stream. 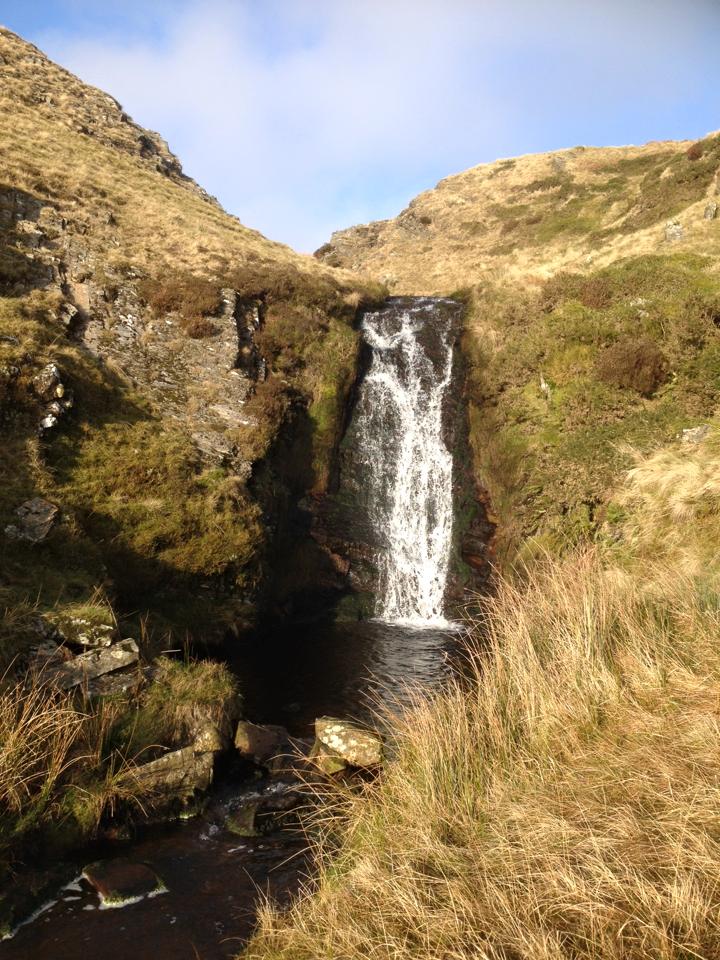 The king of giants sets a challenge

One of the romantic tales of the Mabinogion is that of Culhwch and Olwen, which is one of the earliest Welsh and Arthurian tale.

Olwen was reputedly the most beautiful girl in the world, and her father was Ysbaddaden Bencawr, a powerful giant. Prince Culhwch was destined only to marry Olwen, but first he had to undertake a series of challenges set by Ysbaddaden.  To complete the challenges Culhwch seeks the help of his cousin, King Arthur.

Where Olwen (literally 'white footprint') walked a trail of white flowers would appear in her footprints. Caer Olwen, one of a series of hillforts along a long, wooded ridge to the west of the Teifi river, near Lampeter, recalls her name.  It is on a one of the possible routes that Culhwch, Arthur and his knights took in pursuit of the Twrch Trwyth to fulfil one of the challenges that Olwen's father had set them - to capture the comb and scissors that  that the giant Boar-Prince - y Twrch Trwyth - kept between his ears. 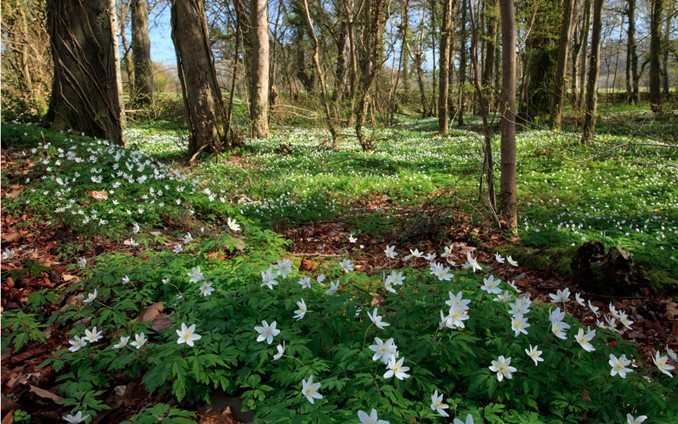 The legend follows the hunt of the Twrch Trwyth across south and west Wales.  One episode recounts how two of Arthur's knights, Cai and Bedwyr, were sitting on the slopes of Pumlumon, contemplating how to tackle the giant Dillus Farfog in order to pluck the hair from his beard to make a leash for the dogs hunting y Twrch Trwyth and his feral piglets. They spotted the smoke from the giant's fire, set a trap and successfully plucked enough of his beard to form the leash. A beard in Welsh is 'barf'. Could the deep gorge below the fields of the farm between Devil's Bridge and Ponterwyd, called Erwbarfau (which can be translated as the 'acre of the beards'? ) be where the canny knights captured the hapless giant?

The Twrch Trwyth was finally run to ground at Garth Gugrun, a hill fort in the Ystwyth Valley,  and the prized comb and scissors retrieved from between his ears. However the Twrch escaped and vanished into the sea.

Pendinas hillfort, which over looks Aberystwyth has a commanding view of Cardigan Bay, was, according to legend, the citadel of Maelor Gawr. (Maelor the Giant)

Maelor's sons, the giants Crugyn and Bwba had forts located inland of Aberystwyth, one in the Ystwyth valley, overlooking Llanilar, and the other in the parish of Llanbadarn, the valley of the Rheidol. Ask the locals about the ghoulish story of Cornippyn's headless dog.

Find the five, and more cairns, on the summits of Pumlumon, the mountain close the the very centre of Wales, where King Arthur's knights, Cai and Bedwyr, sat in the wind.

Visit Llangrannog. You can't miss the craggy outcrop of Carreg Bica.  The best view is from the coast path, near the statue of St Carannog, which benignly overlooks the beach.

On your way to the beach at Penbryn, stop at the teashop at Llongborth, and visit the ancient church on the hill.

Take a dip in the secret pool where the giant is said to have washed his hands at Claerddu bothy near the remote Teifi Pools in Ceredigion's Cambrian Mountains.

Follow the Teifi valley and discover hidden Celtic iron age hillforts  in woodlands along its length, associated with the legends of mythical heroes of the Mabinogion, including a series of hillforts in Longwood, near Lampeter.

Discover sites across Ceredigion dedicated to saints from the fifth and sixth centuries, but which have their roots in the pre-Christian mythology of giants and dragons.

Ceredigion in the Age of Saints

Walk to the summit of Pumlumon